MOSCOW – Russia’s unemployment rate dropped to a record low in May but industrial output fell and consumer demand, measured by retail sales, waned after a decline in real wages amid high inflation, data from Rosstat statistics service showed on Wednesday.

Russia’s economy is plunging into recession and inflation is still hovering near a 10-year high after Russia sent tens of thousands of troops into Ukraine on Feb. 24, triggering unprecedented Western sanctions.

The evidence of economic contraction was underpinned by Rosstat data showing that Russia’s industrial output fell 1.7% in May compared with a year ago. Some sectors recorded a massive downturn, including car production which shrank 96.7% in annual terms.

But the number of people unemployed in Russia slid 1 percentage point to 3.9% of the workforce in May, its lowest since the statistics service started publishing the figure in 1992, according to the Eikon database.

This came as a surprise as experts predicted an increase in unemployment, especially given that scores of Western companies have decided to leave Russia and some have cut their staff.

Analysts polled by Reuters had on average forecast unemployment of 4.5% in May.

Despite the robust employment figure, demand in the economy was weak, Economy Minister Maxim Reshetnikov said on Wednesday.

Retail sales, the gauge of consumer demand, which is Russia’s main economic growth driver, fell 10.1% in May after a 9.8% drop in April. Analysts had forecast a fall of 5.5% compared with the year-ago period in the Reuters poll.

The decline in demand comes after real wages, which are adjusted for inflation, fell 7.2% year-on-year in April, Rosstat data showed on Wednesday.

Russia’s economy will shrink 15% this year and 3% in 2023 as the hit from Western sanctions, an exodus of companies, a Russian “brain drain” and collapse in exports wipe out 15 years of economic gains, a global banking industry lobby group said in June.

The latest Russian official forecasts are less pessimistic. The economy ministry expects gross domestic product (GDP) to contract by 7.8% in 2022. Previously, it had said the economy was on track to contract by more than 12%, in what would be the biggest GDP drop since the mid-1990s, after the fall of the Soviet Union. 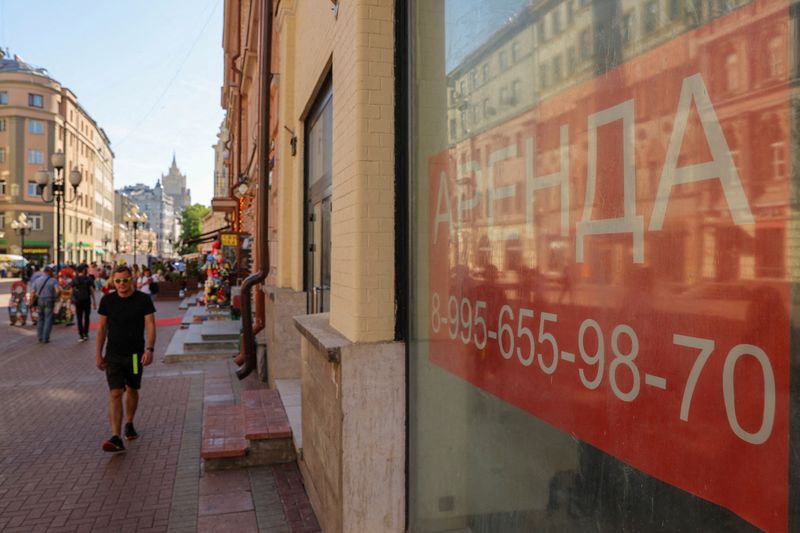