(Reuters) – Strikes and staff shortages are forcing airlines to cancel thousands of flights and causing hours-long queues at major airports, dashing hopes of a sizzling first summer after COVID lockdowns.

Here is a summary of some of the developments:

After job cuts and pay cuts when COVID-19 brought travel to a grinding halt, staff across the industry from pilots to baggage handlers are asking for big pay increases and better working conditions.

Norwegian Air earlier in June agreed a 3.7% pay rise for pilots among other benefits, in a sign of what other airlines may have to offer to avoid labour strife.

British Airways staff at London’s Heathrow airport have voted to strike after the airline failed to roll back a 10% pay cut imposed during the pandemic, with the strike likely to take place during the peak summer holiday period over the next two months.

Around 10% of flights from Paris’s main international airport Roissy-Charles de Gaulle got cancelled as airport workers went on strike. Airport operator ADP expected 100 flights to be cancelled, 50 incoming and 50 departing, over the course of the day.

German trade union Verdi called on technical staff at Hamburg airport to go on strike on Friday, just as school holidays in the region kick off. The airport’s chief executive said he expected little negative impact from the action.

Strikes by Ryanair cabin crew unions in Belgium, Spain, Portugal, France and Italy affected less than 2% of the 9,000 flights scheduled between Friday and Sunday, the Irish low-cost carrier said. Crews in Spain are set to strike again on June 30 and July 1-2.

Spain-based cabin crew at easyJet plan to go on strike for nine days in July, demanding a 40% increase in their basic salary which is much lower than in countries such as France and Germany, local union USO said.

A German union representing Lufthansa ground staff is demanding at least 350 euros per month more over 12 months to cushion the effects of soaring inflation, with first round of negotiations set to take place June 30.

The airline’s chief executive has apologised to employees and customers for the travel chaos, admitting the company had “made mistakes” when cutting costs to cope with pandemic-related losses.

The Scandinavian airline and its pilots agreed to extend by three days a deadline for wage talks, postponing the risk of a strike. Flights continued as normal on Wednesday, but up to 1,000 pilots in Denmark, Sweden and Norway – around 80% of those flying for SAS – plan to go on strike unless a deal is found before July 2.

Lufthansa’s Swiss business has cut about 2% of its flights between August and October due to labour shortages, strikes and rising COVID-19 infections, becoming the latest example of airlines slashing capacity and adding to the thousands of cancellations the German carrier had announced for the summer.

Airports, including Gatwick near London and Amsterdam’s Schiphol, are also limiting the volume of passengers they will handle over the summer.

British transport minister said on Thursday it was up to the airlines to avoid a repeat of recent chaotic scenes at airports, calling for them to run “realistic” summer schedules.

Airports and airlines are trying to hire more workers from pilots to security and border control staff and baggage handlers after many left during the COVID-19 crisis.

Industry executives say it is hard to recruit for often physically demanding, relatively low paid work at airports often located out of town. Training staff and getting them security clearance to work at airports also takes months.

One of Europe’s busiest airports needs to hire 500 security staff. Before the pandemic, there were 68,000 workers in and around the airport, now there are 58,000.

** Charles de Gaulle and Orly airports in Paris need to fill 4,000 jobs mainly in security, maintenance and travel retail, according to airport operator Groupe ADP and the CDG Alliance.

More than 20,000 people were laid off at Charles de Gaulle during the pandemic, according to the CGT union.

Airport security company ICTS which operates at Charles de Gaulle is offering a one-off 180 euro bonus to those delaying their vacation until after Sept. 15 and 150 euros for staff who sign up new recruits, according to a CGT union representative.

** Germany will fast-track work permits and visas for several thousand foreign airport workers, mainly from Turkey, to work with grounds crews, including in baggage handling in order to help to ease the travel chaos.

According to the ADV airport association, about one in five jobs in security, check-in and aircraft handling is unfilled at the country’s airports.

** Ireland agreed to put the army on standby to help with security at Dublin airport should staffing be hit by a resurgence of COVID-19 during the rest of the summer travel period.

** The Portuguese government plans to more than double border control staff at the country’s six airports by July 4.

** In Spain, the police will hire 500 more staff taking the total to 1,700 deployed at the country’s busiest airports, including Madrid and Barcelona. 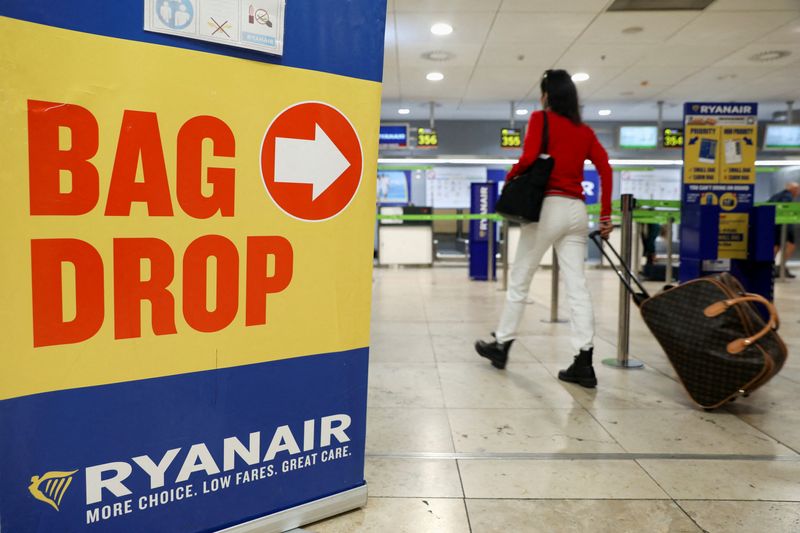