NEW YORK – The second half of the year started with gains in global stock indexes on Friday ahead of the long U.S. holiday weekend, while the 10-year Treasury yield fell the most since COVID-19 hit markets in March 2020.

Copper prices slumped to their weakest in 17 months.

Stocks were lower early in the New York session but rallied late to end higher. U.S. markets will be closed Monday for the U.S. Fourth of July holiday.

Cardillo said he expects stock market performance to improve overall in the second half of the year.

The U.S. benchmark S&P 500, which closed out its worst first-half since 1970 on Thursday, climbed 1.1%. MSCI’s world stocks index, which on Thursday notched its biggest percentage decline for the first half of the year since its 1990 creation, rose 0.4%.

In Treasuries, yields tumbled as investors priced in the likelihood the Federal Reserve will force inflation down to near its target rate.

The yield on 10-year notes tumbled 23.3 basis points from the open to the session’s lowest point, before paring the decline, to end down 8.5 basis points at 2.889%.

The two-year yield, which typically moves in step with interest rate expectations, slid 8.8 basis points to 2.839%. Both the two-year and 10-year yields were at roughly four-week lows.

Data on Friday showed manufacturing production in the euro zone fell for the first time last month since the initial wave of the coronavirus pandemic in 2020, while inflation numbers hit another record high.

In the United States, manufacturing activity slowed more than expected in June, with a measure of new orders contracting for the first time in two years, more evidence the economy was cooling amid aggressive monetary policy tightening by the Federal Reserve.

Oil prices climbed amid supply outages in Libya and expected shutdowns in Norway, which offset worries that an economic slowdown could dent demand.

The dollar was up on Friday, having just scored its best quarter since 2016. Pessimism about the global economic outlook boosted demand for the safe-haven U.S. dollar Friday while the Australian dollar, a proxy for global growth, fell to a two-year low.

(Reporting by Caroline Valetkevitch; Additional reporting by Herbert Lash and Karen Brettell in New York; and Marc Jones in London and Tom Westbrook in Singapore; Editing by Sriraj Kalluvila, Will Dunham and Chris Reese) 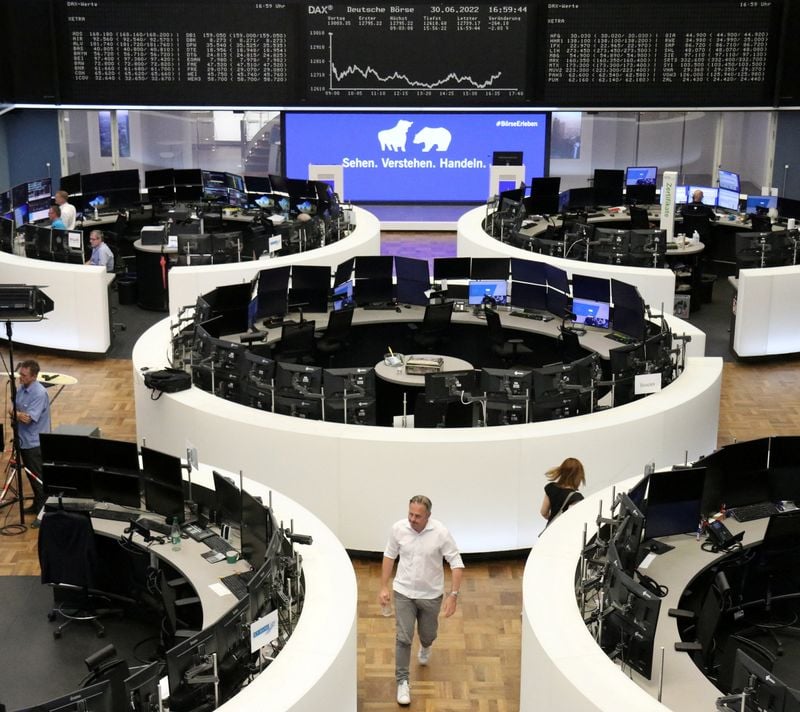