By Dave Sherwood and Marc Frank

Protests – the largest since the late Fidel Castro took power in 1959 – rocked the Communist-run island as Cubans poured onto the streets demanding social and economic reform.

But the rallies were short-lived. Cuban authorities have since sentenced hundreds to jail time on charges from public disorder to sedition, prompting activists to allege rights violations. Other dissidents, under pressure and seeing momentum fizzle, have fled the island.

More than 140,000 Cubans, from all walks of life, have left for the United States since October, U.S. government figures show, the largest exodus from Cuba in decades.

That migration, combined with a more generalized crackdown on dissent, has left in limbo the legacy – and future – of one of the boldest protest movements since the start of the Cuban revolution, analysts say.

“Discontent has to a large extent left the country,” said Bert Hoffmann, a Latin America expert at the German Institute of Global and Area Studies. “To be sustainable over time, (the movement) needs organization.”

One year later, Cuban exiles and supporters outside the country have called for rallies to mark the date, but there is little sign of plans for organized protests on the island itself.

More than a dozen dissident-leaders, in public statements or interviews with Reuters, say that is because Cuban authorities have left them with an unpalatable choice: stay quiet, get off the island, or go to jail.

“It was an impossible decision,” said Cuban Carolina Barrero in an interview from Santiago, Chile. Barrero is a member of Cuba’s San Isidro Movement, an artist-activist collective that predated the July 2021 protests.

Barrero, also a Spanish citizen, said authorities gave her 48 hours to leave Cuba earlier this year, which she called part of a “witch hunt” following the rallies.

Nonetheless, the protests have left a mark, she said.

“They managed to inspire, to break a barrier,” Barrero said. “(The Cuban government) knows perfectly well that the tensions are still there, and that any little protest could explode.”

Cuban authorities did not reply to a request for comment on this story.

While last year’s protests have faded, the economic crisis seen as their catalyst has not. Long lines for food, public transport, fuel and medicine stoke frustration. Energy blackouts are frequent.

President Miguel Diaz-Canel has taken note. He has tasked his government to be more responsive, and recently launched a program to help improve infrastructure and refurbish over 1,000 impoverished neighborhoods in the country.

Some protest leaders, many overseas, dream of making a comeback. Arturo Lopez-Levy, a U.S.-based Cuban political expert, said they need, however, to regain touch with the real source of anger among Cubans: the economy.

“The opposition, in its agenda, is increasingly disconnected,” he said.

Anamely Ramos, another leader of the San Isidro movement now outside Cuba, said global attention had meant the “movement expanded in a way that we ourselves could not control.”

“This made it stronger but also made it more vulnerable,” she said.

Ramos said the group’s leaders were repeatedly detained and questioned and that she too had felt pressure to leave. She has twice tried to return home but been denied entry as “inadmissible,” without explanation, according to a Cuban Interior Ministry document viewed by Reuters.

San Isidro is now trying to reimagine itself off-island, she said, adding she believed there was a roll for activism both in and outside of the country.

While another July 11 seems unlikely, he said, he was optimistic there would be “many mini-July 11s.”

“I believe that the protests are here to stay in Cuban society,” he said.

(Reporting by Dave Sherwood and Marc Frank, additional reporting by Anett Rios and Nelson Acosta in Havana and Rodrigo Gutierrez in Santiago, Editing by Rosalba O’Brien) 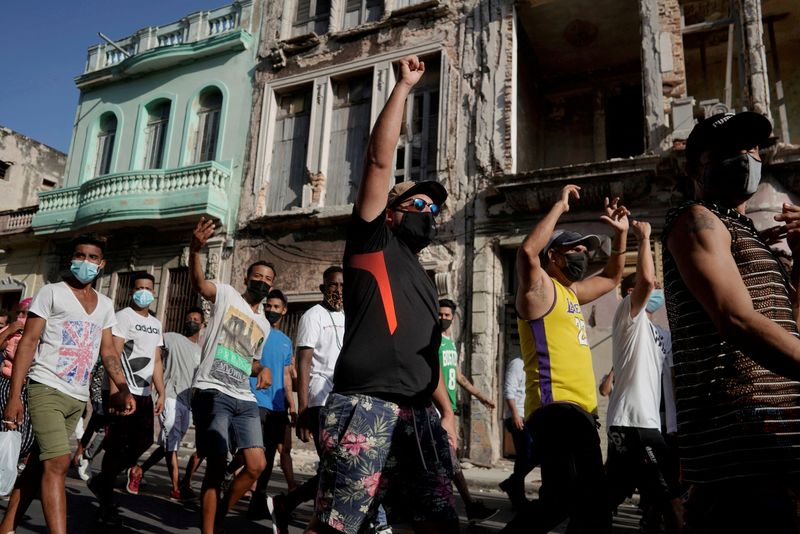