By Tom Balmforth and David Gauthier-Villars

KYIV – The Western supply of high-precision weapons is helping Ukraine slow down Russia’s invasion, but the volumes of weapons are not enough and soldiers need time to adapt to using them, a top Ukrainian security official said on Friday.

Kyiv said late last month it had received U.S.-made High Mobility Artillery Rocket Systems (HIMARS) and has since praised them for battlefield successes such as destroying Russian warehouses and command posts as well forcing Russian troops from the strategic Snake Island in the Black Sea.

“When they came in, the Russian war machine could instantly feel its effect,” Oleksiy Danilov, secretary of the National Security and Defence Council, told Reuters in an interview in Kyiv. “What they (the Russians) wanted to do in three days, they now do in two or one and a half weeks.”

But receiving more Western military aid is vital for Ukraine as it braces for a Russian assault on the eastern region of Donetsk.

Last week Moscow used its crushing numerical superiority in artillery to claim control of the neighbouring region of Luhansk.

The battle for Luhansk, which some commanders likened to the slow, grinding fighting of World War One, laid bare Kyiv’s lack of ammunition for Soviet-era artillery, military analysts say, increasing the importance of Western supplies.

“The problem currently is we have a lot of Soviet weaponry left, which uses 122mm and 152mm calibre shells. There’s not a lot of (those shells) in the world, so we are going through a transition to NATO’s 155mm calibre,” Danilov said.

Speaking at his heavily-guarded office in Kyiv, Danilov who is himself from Luhansk region said that Russia could have been responsible for attacks on Soviet-era ammo depots that occurred in Ukraine in the years that led up to the Feb. 24 invasion.

“There have been situations of our depots destroyed. Of course this could have been Russia. We are target number one for them,” he said.

Russian President Vladimir Putin has made capturing the Donbas which comprises the Luhansk and Donetsk regions a key war aim.

Asked if the West might try to push Ukraine to agree to a ceasefire with Russia if Moscow manages to capture the rest of the Donbas, Danilov said he hoped the West would remain united behind Kyiv.

“If there is a fracture in the unity, a different situation can occur,” he said, adding that in any case any agreement with Moscow would have to have the support of the Ukrainian people.

Despite praising the Western military aid, he acknowledged that soldiers needed time to learn how to use the weapons.

“This is a process — you can’t just pick up a weapon and know how to use it in half an hour.” 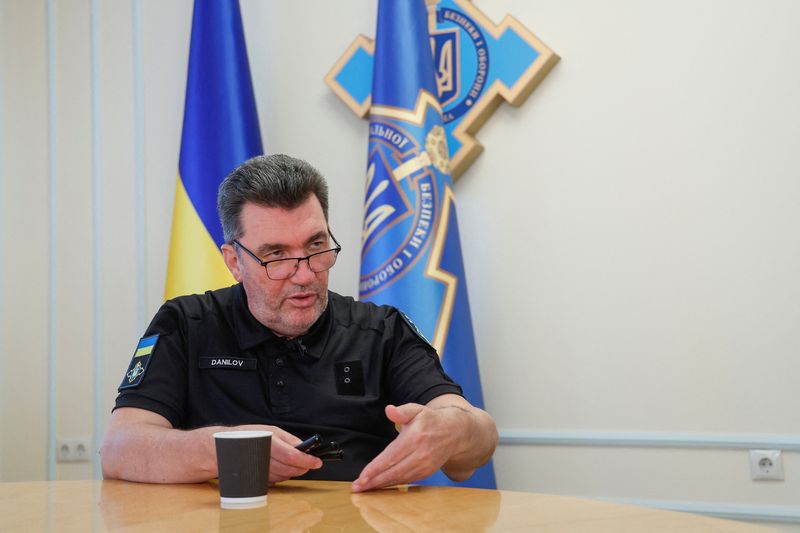