By Devjyot Ghoshal and Alasdair Pal

Rajapaksa fled the country early on Wednesday, likely headed to the Maldives, hours before he was to have left office.

The country’s parliamentary speaker had said Rajapaksa would step down after violent protests on Saturday when demonstrators stormed the president’s official residence and set fire to the prime minister’s home in Colombo.

Anti-government protesters angry over power blackouts, shortages of basic goods and rising prices have long demanded that Rajapaksa steps down, but the retired military officer had resisted the demands for months, invoking emergency powers in an attempt to maintain control.

The violence and political chaos gripping the island nation of 22 million comes amid negotiations with the International Monetary Fund (IMF) over a rescue plan, as well as proposals to restructure its sovereign debt, both of which could be thrown into disarray.

HOW DID IT COME TO THIS?

Analysts say that economic mismanagement by successive governments has weakened Sri Lanka’s public finances, leaving national expenditure in excess of income and the production of tradable goods and services at inadequate levels.

The situation was exacerbated by deep tax cuts enacted by the Rajapaksa government soon after it took office in 2019. Months later, the COVID-19 pandemic struck.

That wiped out much of Sri Lanka’s revenue base, most notably from the lucrative tourism industry, while remittances from nationals working abroad dropped and were further sapped by an inflexible foreign exchange rate.

To keep the economy afloat, the government leaned heavily on its foreign exchange reserves, eroding them by more than 70% in two years.

The crisis has crippled Sri Lanka, once seen as a model for a developing economy. Fuel shortages have led to long queues at filling stations as well as frequent blackouts, and hospitals have run short of medicine. Runaway inflation reached 54.6 percent last month and could rise to 70 percent, the central bank has said.

WHAT DID THE GOVERNMENT DO?

Despite the rapidly deteriorating economic environment, the Rajapaksa government initially held off talks with the IMF.

For months, opposition leaders and some financial experts urged the government to act, but it held its ground, hoping that tourism would bounce back and remittances would recover.

Eventually, aware of the scale of the brewing crisis, the government did seek help from countries including India and China, regional superpowers that have traditionally jostled for influence over the strategically located island.

India has extended billions of dollars in loans to help pay for vital supplies. In all, New Delhi says it has provided support worth over $3.5 billion this year.

China has intervened less publicly but said it supports efforts for the island nation to restructure its debt.

Earlier in 2022, Rajapaksa asked China to restructure repayments on around $3.5 billion of debt owed to Beijing, which in late 2021 also provided Sri Lanka with a $1.5 billion yuan-denominated swap.

A sitting president being ousted by street protests is unprecedented in Sri Lanka’s post-independence history.

Sri Lanka’s constitution dictates that should a president resign, the country’s prime minister will assume the role.

But incumbent Ranil Wickremesinghe has said he too will stand down.

It was therefore likely that the parliament speaker, Mahinda Yapa Abeywardena, will assume temporary charge of the country, until lawmakers elect a new president to complete the rest of Rajapaksa’s term, due to end in 2024, said constitutional expert Jayadeva Uyangoda. 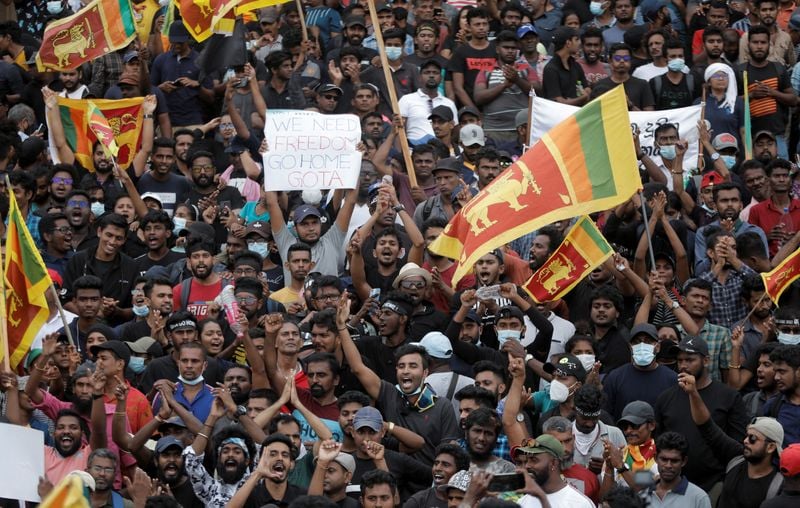