SUVA, Fiji – The leader of Vanuatu, pushing to take climate change to the international court, said the slow pace of international negotiations over emissions reduction was “totally out of step” with the impact Pacific islands are seeing.

Leaders from 15 nations are meeting in Fiji for the Pacific Islands Forum, where they are discussing how to gather more international support and funding to fight the impact of climate change, as well as China’s ambitions for greater security ties across the region.

International funding for Pacific islands to rebuild societies threatened by rising sea levels would be boosted if the International Court of Justice (ICJ) issues an advisory opinion on the obligation of states to protect the rights of future generations from the impacts of climate change, he said.

Loughman said Vanuatu had gained “unanimous support” from forum members for a call for the United Nations General Assembly to back an ICJ case.

Developed nations most responsible for climate change have been reluctant to commit to financing for low-lying island states to deal with the loss and damage caused by rising sea levels.

An ICJ opinion would speed up the mobilization of climate funds, put human rights at the centre of the debate and respond to the demands of young people, Loughman told a community dialogue in Suva on the sidelines of the forum.

“Time seems totally out of step with the reality of climate change’s impact on the lives of Pacific people,” he said.

“Our villages, our islands, our women, our young people, our chiefs…are calling on us, Pacific leaders, to take action to fight this emergency.”

Climate change is a major focus of the forum, despite the shock withdrawal of Kiribati from the group, discussions over a bid by China to sign a regional trade and security pact, and the announcement United States Vice President Kamala Harris would make a virtual address.

Fiji Prime Minister Frank Bainimarama told the forum on Tuesday the region was in a state of turmoil from the economic shocks of the COVID-19 pandemic and the threat of climate change, and as superpowers and some middle powers “clamour to shape the world in their favour”.

He said the most important question for the forum was regional unity: “Will we forge ahead together, will we take individual paths, will we be assertive or leave it to others to decide our fate?”

“Competition is one of the challenges the region faces, and it is best faced together,” she said. 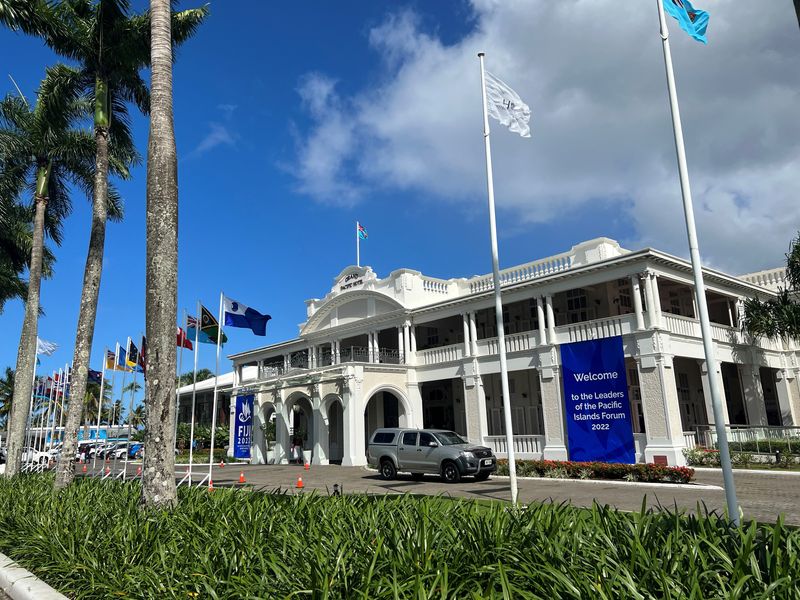