DERBY, England – Rolls-Royce said it would start testing this year a prototype of its UltraFan engine, the world’s largest turbofan, which has been designed to be up to 25% more efficient than its first generation Trent engines.

The demonstrator has a fan diameter of 140 inches, the biggest size viable for the widebody aircraft sector, UltraFan chief engineer Andrew Geer told reporters at Rolls’ headquarters in Derby, central England, ahead of the Farnborough International Airshow, which opens on Monday.

The technology could be scaled down for other programmes, he added, including any return by the British company to the narrowbody plane market.

That is likely to be years away, however, as UltraFan will be “put on ice” after the testing finishes, with no further investment until Boeing or Airbus launch a new aircraft programme, chief executive Warren East told the Financial Times last year.

Geer said UltraFan was a platform for a range of technologies rather than a single engine, and many of its innovations could be used in Rolls’ existing programmes.

For example, it has carbon titanium fan blades rather than the hollow titanium blades on existing Trents, and a record-breaking 64 megawatt power gearbox.

He said the first test run would also use 100% sustainable aviation fuel from Air BP – derived from sources such as vegetables oils instead of fossil fuels.

Chris Cholerton, president of civil aerospace, said: “The suite of technologies we are testing on the demonstrator will create opportunities to make improvements to our current fleet and provide new capability for future propulsion systems.”

As well as working to improve the efficiency of gas turbines, Rolls is working on nascent hydrogen and hybrid electric technologies to power commuter and regional aircraft.

It said it was planning rig and engine tests to prove hydrogen could safely and efficiently deliver power for small-to-mid size aircraft from the mid-2030s onwards.

The first will use liquid hydrogen to power an AE2100 engine this year, it said, with a Pearl 15 engine test to follow at an unspecified date. 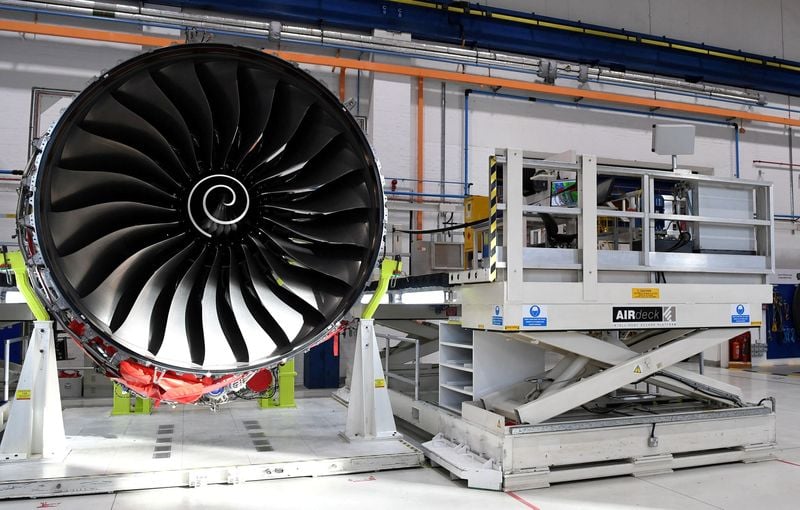