WASHINGTON – Scientists have answered a longstanding question about mammalian evolution, examining ear anatomy of living and extinct mammals and their close relatives to determine when warm-bloodedness – a trait integral to the lineage’s success – first emerged.

These first creatures that attained this milestone, called mammaliamorph synapsids, are not formally classified as mammals, as the first true mammals appeared roughly 30 million years later. But they had begun to acquire traits associated with mammals.

Endothermy evolved at a time when important features of the mammal body plan were falling into place, including whiskers and fur, changes to the backbone related to gait, the presence of a diaphragm, and a more mammal-like jaw joint and hearing system.

“Endothermy is a defining feature of mammals, including us humans. Having a quasi-constant high body temperature regulates all our actions and behaviors, from food intake to cognition, from locomotion to the places where we live,” said paleontologist Ricardo Araújo of the University of Lisbon’s Institute of Plasmas and Nuclear Fusion, co-lead author of the study published in the journal Nature.

The high metabolisms of mammal bodies maintain internal temperature independent of their surroundings. Cold-blooded animals like lizards adopt strategies like basking in the sun to warm up.

Mammalian endothermy arrived at an eventful evolutionary moment, with dinosaurs and flying reptiles called pterosaurs – creatures that long would dominate ecosystems – first appearing at about that time. Endothermy offered advantages.

“Run faster, run longer, be more active, be active through longer periods of the circadian cycle, be active through longer periods of the year, increase foraging area. The possibilities are endless. All this at a great cost, though. More energy requires more food, more foraging, and so on. It is a fine balance between the energy you spend and the energy you intake,” Araújo said.

The mammalian lineage evolved from cold-blooded creatures, some boasting exotic body plans like the sail-backed Dimetrodon, mixing reptile-like traits like splayed legs and mammal-like traits like the arrangement of certain jaw muscles.

Endothermy emerged relatively quickly, in perhaps less than a million years, rather than a longer, gradual process, said paleontologist and study co-lead author Romain David of the Natural History Museum in London.

An early example was a vaguely weasel-like species, Pseudotherium argentinus, in Argentina about 231 million years ago. The later true mammals were the ancestors of today’s three mammalian groups: placentals, marsupials and monotremes.

“Given how central endothermy is to so many aspects of the body plan, physiology and lifestyle of modern mammals, when it evolved in our ancient ancestors has been a really important unsolved question in paleontology,” said paleontologist and study co-author Ken Angielczyk of the Field Museum in Chicago.

Determining when endothermy originated through fossils has been tough. As Araújo noted: “We cannot stick thermometers in the armpit of your pet Dimetrodon, right?”

The inner ear provided a solution. The viscosity, or runniness, of inner ear fluid – and all fluid – changes with temperature. This fluid in cold-blooded animals is cooler and thicker, necessitating wider canals. Warm-blooded animals have less viscous ear fluid and smaller semicircular canals.

The researchers compared semicircular canals in 341 animals, 243 extant and 64 extinct. This showed endothermy arriving millions of years later than some prior estimates.

Mammals played secondary roles in ecosystems dominated by dinosaurs before taking over after the mass extinction event 66 million years ago. Among today’s animals, mammals and birds are warm-blooded.

“It is maybe too far-fetched, but interesting, to think that the onset of endothermy in our ancestors may have ultimately led to the construction of the Giza pyramids or the development of the smartphone,” Araújo said. “If our ancestors would have not become independent of environmental temperatures, these human achievements would probably not be possible.” 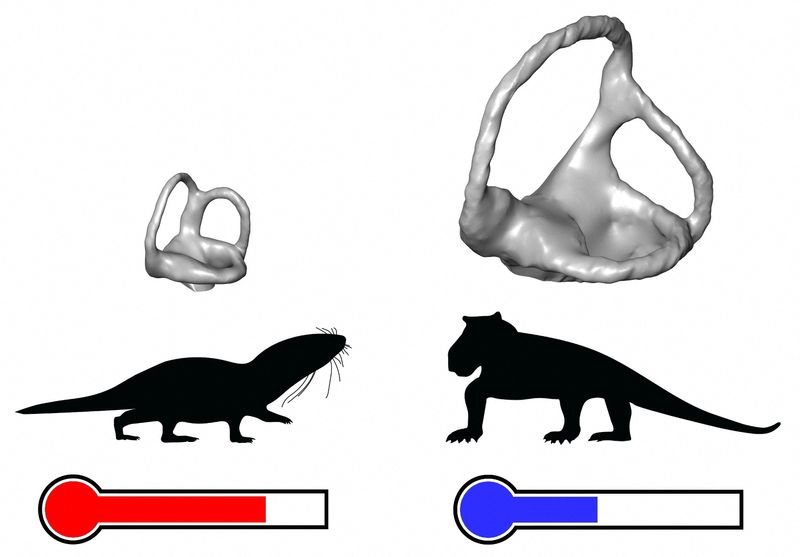 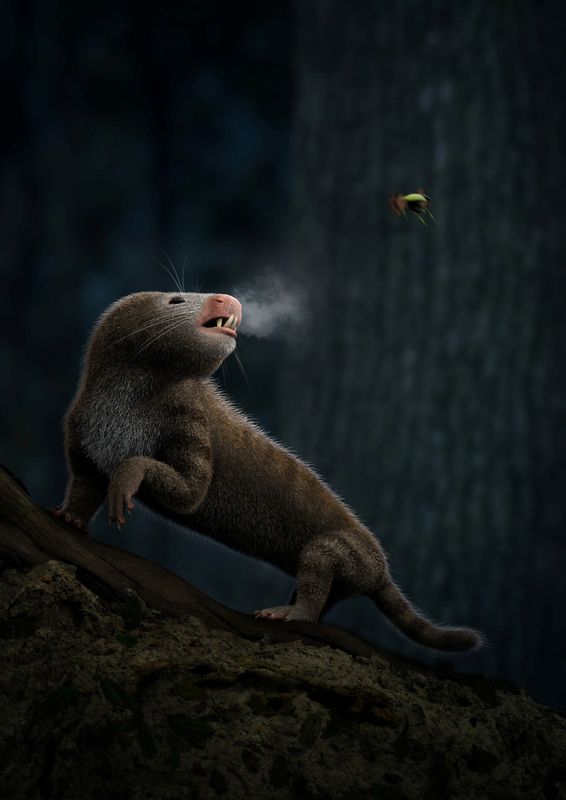