SHENZHEN, China – The Chinese city of Shenzhen told 100 major companies including iPhone maker Foxconn to set up “closed-loop” systems as it battles COVID-19, according to a document attributed to the local government circulating online on Monday.

While Reuters could not independently verify the document, a notice at a Shenzhen office of oil giant CNOOC Ltd seen by Reuters said that the building would be closed for seven days until July 31, with staff to work from home and continue with daily COVID testing.

A CNOOC spokesperson did not have an immediate comment.

The Shenzhen government did not respond to a request for comment.

Taiwan-based Foxconn said that operations at its Shenzhen facilities were “normal” and that it would follow government guidelines to ensure safe production.

The order attributed to Shenzhen’s department for industry and information said that major companies, including BYD Co, Huawei Technologies Co, and ZTE Corp, should minimise entry and exit into the so-called loops.

Huawei did not immediately respond to requests for comment, while BYD, ZTE and Shenzhen-based dronemaker DJI Technology Co declined to comment.

During its lockdown in April and May, the Chinese economic hub of Shanghai tried to keep factories open under “closed loop” operations, where staff live and work on-site, but businesses said the arrangements posed numerous difficulties.

While case numbers are low by global standards, a slow uptick over the last week has pushed local authorities to step up vigilance to comply with the central government’s “dynamic zero” policy of containing outbreaks as soon as they emerge.

Shenzhen has not ordered blanket closure of businesses or tough curbs on people’s movements but has sealed residential compounds and buildings identified as being at higher risk.

Many offices, restaurants and public spaces required proof of a COVID test from within 24-hours as of Monday.

During an outbreak in March, Shenzhen adopted one week of so-called “slow living”, when residents underwent multiple rounds of testing and largely stayed at home, with one member of each household allowed out every few days to buy necessities. 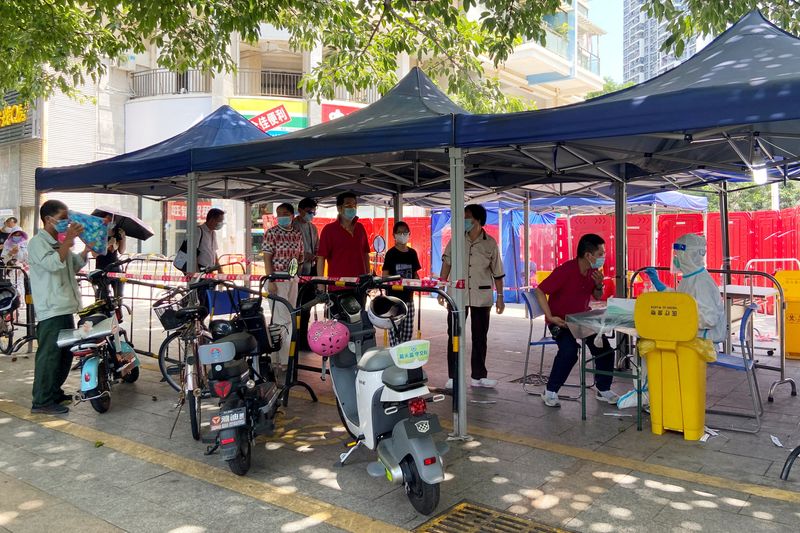