(Reuters) -Intel Corp slashed its annual sales and profit forecasts on Thursday after missing estimates for second-quarter results as demand for its chips used in personal computers cools, sending shares down 10%. The company also forecast current-quarter results well below expectations, blaming the “sudden and rapid decline” in economic activity and execution issues.

Runaway inflation and the reopening of offices and schools have led people to spend less on PCs than they did during lockdowns, when many bought computers for work and school as they stayed home during the pandemic.

Chipmakers are also under pressure from a spate of COVID curbs in key PC market China and the Ukraine war that have worsened supply-chain snarls and dragged demand further. Global shipments of PCs are expected to drop 9.5% this year, according to IT research firm Gartner.

“The economic shift was harsher and drove not only consumption changes in the marketplace, but also dramatic moves in the inventory position of key customers,” Intel Chief Executive Pat Gelsinger told Reuters.

“Those effects caused a very sharp shift in the business, and we didn’t execute particularly well.”

Intel now expects fiscal 2022 revenue between $65 billion and $68 billion, compared with its earlier forecast of $76 billion. It also forecast adjusted profit of $2.30 per share, down from a prior outlook of $3.60 per share.

Still, Intel will not delay its $20 billion investment for a new mega chip factory in Ohio because of this tougher period, Gelsinger told Reuters. “You just don’t build factories like this based on a couple of quarter cycles,” said Gelsinger. “The semiconductor industry is doubling over the decade and I need capacity to grow into that opportunity.”

While Intel took a major hit with the latest downturn, its competitors fared much better. Taiwan Semiconductor Manufacturing Co Ltd and Samsung Electronics Co Ltd, which, while warning about dampening PC and smartphone demand, delivered stronger sales growth in the by-gone quarter.

TSMC projected current quarter sales if achieved could be its highest in the 10 quarters, and raised its full year sales forecast. (https://reut.rs/3zFpGdr)

Intel said sales from Datacenter and AI Group (DCAI) fell 16% to $4.6 billion, coming in lower than analysts’ target of $6.46 billion, despite strong growth analysts expect for the overall datacenter market.

“Intel is very dependent on the PC industry, as well as data centers, and OEMs have slowed orders for 2H22,” said analyst Ryan Reith of market intelligence firm IDC. “Peers Samsung and TSMC have much broader exposure into mobile, auto, etc…”

Intel, which draws about half of its revenue from selling the chips that power desktops and laptops, also forecast current quarter revenue in the range $15 billion to $16 billion, also lower than an average of estimates of $18.62 billion, according to Refinitiv.

For the reported quarter, sales at Intel’s Client Computing Group (CCG), which supplies PC makers and is the largest contributor to the company’s revenue, fell 25% to $7.7 billion in the reporting quarter. According to IT research firm Gartner, global shipments of PCs are expected to drop 9.5% this year.

Intel’s revenue dropped 22% to $15.3 billion – its seventh straight quarter of decline and were below expectations of $17.92 billion.

On an adjusted basis, the company earned 29 cents per share, missing expectation of 70 cents.

(Reporting by Yuvraj Malik in Bengaluru and Jane Lanhee Lee in Oakland; Editing by Devika Syamnath and Diane Craft) 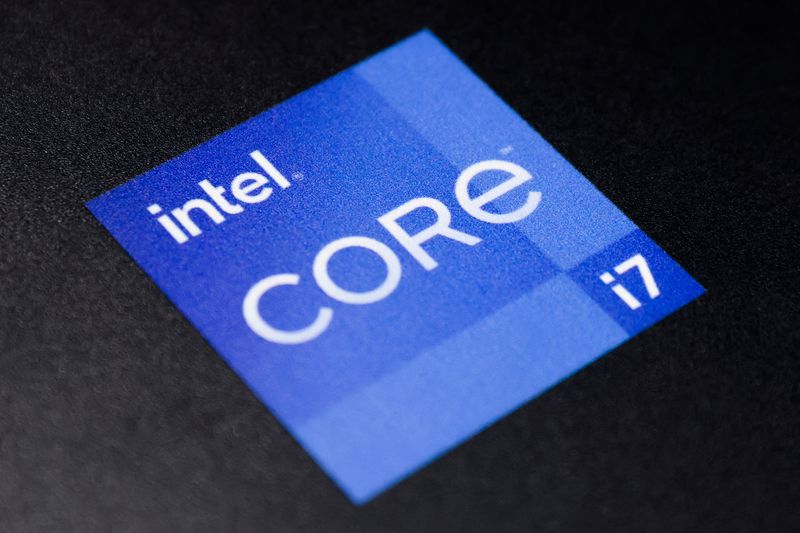