(Reuters) -Indigenous activists unfurled a banner demanding Pope Francis rescind 15th-century papal edicts justifying colonialism at a Mass he presided over Thursday, thrusting the doctrine to the forefront of his apology tour of Canada.

They stood near the front row facing the congregation as the pope was starting Mass in a cathedral outside Quebec City. Most of the people in the church were indigenous.

Sarain Fox and Chelsea Brunelle held up the banner with “RESCIND THE DOCTRINE” written on a white sheet in red and black letters for about two and a half minutes.

But it felt much longer, they told Reuters by telephone.

“We were very nervous,” said Brunelle, 21. They had painted the banner late the night before in a last-minute decision to send a message of protest, she said.

“A missing piece of reconciliation in this visit of the pope, his pilgrimage, is action,” she said.

They took down the banner shortly after security guards told them to, Fox said.

It was not clear whether the pope, who was behind the banner, was able to see what it said. Fox and Brunelle said they felt it was important for the banner to face the community, and think he got the message.

The doctrine of discovery was enshrined in 15th-century papal bulls, or edicts. Indigenous people in Canada have been calling for it to be rescinded for years.

In 2015, Canada’s Truth and Reconciliation Commission, which spent six years investigating residential schools, listed its repudiation as one of 94 calls to action that it laid out.

Francis is on a week-long tour of Canada to apologize for the church’s role in the abusive residential schools system, which removed indigenous children from their homes in a forced cultural assimilation program.

A spokesperson for papal visit organizers said Canadian bishops are asking the pope to address the doctrine of discovery.

“Galvanized by the calls of our Indigenous Partners, and by the Holy Father’s remarks, we are working with the Vatican and those who have studied this issue, with the goal of issuing a new statement from the Church,” Laryssa Waler said in an email on Thursday.

“Canada’s Bishops continue to reject and resist the ideas associated with the Doctrine of Discovery in the strongest possible way.”

At an evening vespers service in the Quebec City cathedral, the pope said the Christian community should never again “allow itself to be infected by the idea that one culture is superior to others, or that it is legitimate to employ ways of coercing others”.

Massimo Faggioli, a professor of theology and religious studies at Villanova University, said the pope was unlikely to formally rescind the doctrine but should address it.

“The Church doesn’t operate like that – it doesn’t issue a document saying, ‘Now we have decided that this old doctrine is no longer true,'” he said. “How the Church does that is to produce new documents with new doctrines that replace old doctrines. … I believe (the pope) should address that issue, and I think he will. But not with a formal document.”

Canadian Prime Minister Justin Trudeau also “discussed the need to … address the Doctrine of Discovery” in a meeting with the pontiff on Wednesday, his office said.

Fox, 34, said she thinks they got their message across.

She hopes her 19-month-old daughter learns about the action someday “as a moment where we actually took a first step to becoming the sovereign people we were always meant to be in this country.” 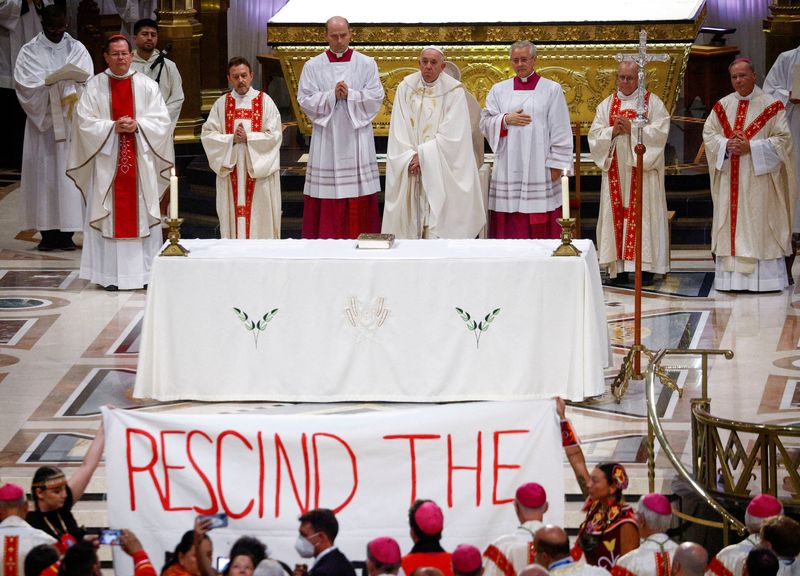