(Reuters) – After years of sweeping crackdowns on dissent, Egypt is set to launch a political dialogue, but the once-powerful and now outlawed Muslim Brotherhood is excluded.

Long viewed as the most influential Islamist movement in the Middle East, the Brotherhood rose to power in Egypt’s first modern free election in 2012, a year after veteran President Hosni Mubarak was toppled in a popular uprising.

But the Brotherhood’s success, which followed decades of confrontation with its old adversary the state, was shortlived.

In 2013, Abdel Fattah al-Sisi, then armed forces chief and now president, removed the Brotherhood’s Mohamed Mursi from power after mass protests against his rule.

Egypt then launched its most ferocious crackdown against the group, handing down death sentences or long prison terms for its leaders and driving its members underground or abroad.

Security forces gunned down hundreds of Brotherhood supporters at a Cairo protest camp in 2013. At least 817 people were killed and likely more than 1,000 when the security forces attacked the camp using bulldozers, snipers, police and ground forces, according to a Human Rights Watch report.

Cairo defended its actions, saying it had given protesters the opportunity to leave peacefully and that armed elements within the Brotherhood initiated the violence.

Despite decades of repression, the Brotherhood developed an extensive and well-organised network of committed activists and had won public support through the charitable work of its professional members. They were also influential in professional organisations such as the doctors’ and lawyers’ syndicates.

Here are some facts about the Muslim Brotherhood.

– Schoolteacher Hassan al-Banna founded the Brotherhood in the Suez Canal town of Ismailia in 1928, partly in response to the British occupation of Egypt. It was one of the first and most successful movements advocating Islam as a political programme in a modern context.

– Within 20 years, the movement had grown to more than 500,000 members, with branches in other Arab countries.

– The Brotherhood said it is was committed to bringing political change in Egypt through non-violent and democratic means.

– The Brotherhood was banned in 1954 after the government of the day accused the group of trying to assassinate President Gamal Abdel Nasser, a charge the Brotherhood has always denied.

– A long period of repression began to ease under President Anwar Sadat in the 1970s. Although it remained banned under Mubarak, the Brotherhood operated openly within limits that varied at the whim of the authorities.

– Mubarak’s government denied the Brotherhood the right to form a political party, arguing that the constitution, which the government wrote, banned religious parties.

– Sisi branded the Brotherhood a terrorist group and said it poses an existential threat to Egypt, an allegation it denies. The Brotherhood says it is committed to peaceful activism.

– Gulf Arab states Saudi Arabia and the United Arab Emirates view the Brotherhood as a threat to their dynastic system of government. Both have declared it a terrorist group.

– In 2019, U.S. President Donald Trump worked to designate group as a terrorist organisation but this never transpired.

– A 2015 British government review said the group was not “linked to terrorist-related activity in and against the UK”. In the Middle East, it saw a “complex and situational relationship, in a region where political violence was and is common.”

It said the the group historically had “engaged politically where possible. But they have also selectively used violence and sometimes terror in pursuit of their institutional goals”.

– Many political parties and campaign groups in the Middle East and further afield trace their roots to the Brotherhood. The militant group Hamas, for instance, was founded as the Palestinian branch of the Brotherhood. The movement is outlawed in Syria, where it helped foment an armed uprising in 1982.

– The group participated in parliamentary elections in Egypt in the 1980s but boycotted the vote in 1990, when it joined most of the country’s opposition in protesting electoral strictures. The Brotherhood skirted a ban on its activities by fielding candidates in elections as independents.

– The Brotherhood won 17 seats in the 2000 parliamentary election and then took 20 percent of the seats in the 454-seat assembly in 2005, making it the biggest opposition bloc despite widespread rigging in the vote.

– The Brotherhood boycotted the 2010 election, which the opposition denounced as rigged. Such abuses fuelled the anger that led to protests in 2011 which brought down Mubarak and his government.

– While the Brotherhood was able to function under Mubarak, it was also a target of repression. Police routinely arrested Brotherhood members, including senior leaders, and held them indefinitely without charge.

– Fears that Mubarak’s internal security could deliver a crushing blow led the group to take a backseat in the revolt against Mubarak. That uprising was largely driven by activists who put national pride before religion.

– It was only later in the 18-day uprising that the Brotherhood came out in full support, although the group said some members of the Brotherhood had taken part independently throughout the protests. 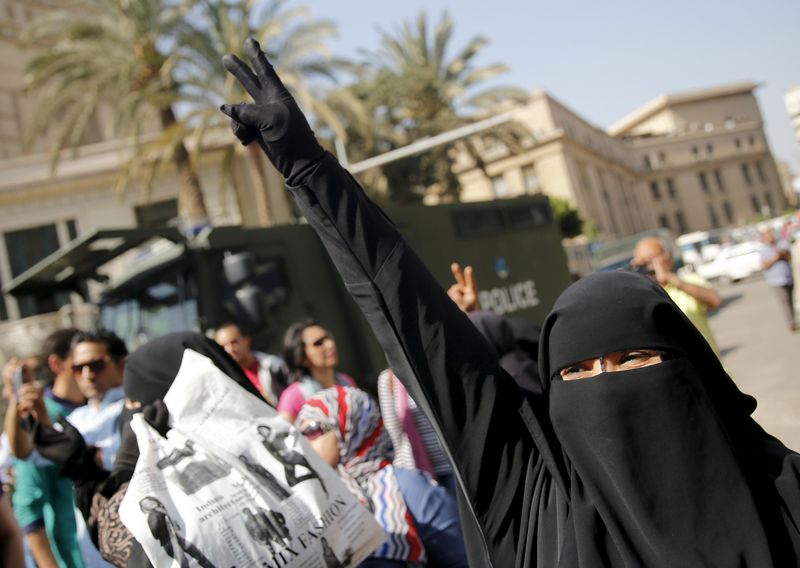