By David Morgan and Rose Horowitch

WASHINGTON -Republicans moved to turn the FBI’s search of former President Donald Trump’s Mar-a-Lago estate into a campaign issue on Tuesday, vowing to probe what they alleged was political interference at the Justice Department if they win majorities in Congress in November.

Trump’s allies in the House of Representatives and the Senate said the FBI’s search for documents Trump removed from the White House was meant to sideline Trump as a possible 2024 presidential contender.

“When Republicans take back the House, we will conduct immediate oversight of this department, follow the facts, and leave no stone unturned,” House Republican leader Kevin McCarthy said on Twitter soon after Trump disclosed the raid on Monday evening.

“Attorney General (Merrick) Garland, preserve your documents and clear your calendar,” he added.

House Speaker Nancy Pelosi, the chamber’s top Democrat, scoffed at Republican claims that Garland had politicized the FBI, pointing out that agency director Christopher Wray was appointed by Trump.

“What would you expect them to say?” Pelosi chuckled to reporters in the U.S. Capitol. “That’s typical of them to try to undermine a person.”

Republicans are favored to win a majority in the House, and have a chance of reclaiming the Senate, in the Nov. 8 midterm elections. They could use either to launch probes.

Trump’s own reputation has taken a hit within his own party in recent weeks, following congressional hearings into his actions around the Jan. 6, 2021, assault on the Capitol by his followers. One third of Republican respondents to a Reuters/Ipsos poll last month said they think Trump should not run for president again in 2024.

Trump’s son Eric acknowledged that the search was part of an investigation into the former president’s removal of official records from the White House to his Florida estate. The FBI action marked an escalation of a federal records probe, one of several investigations Trump is facing from his time in office and in private business.

But Republicans ignored the possibility of a serious records breach.

“Political targeting is the hallmark of a Banana Republic, not the United States,” Republican Representative Vern Buchanan vowed on Twitter. “House Republicans will exert strong oversight next year.”

Republicans spent years probing Trump’s 2016 rival, Democrat Hillary Clinton, over her use of a private server for official emails during her tenure as secretary of state, an investigation that grew out of the 2012 attack in Benghazi, Libya, that killed four Americans.

During his 2016 campaign, Trump encouraged his supporters to regularly chant “Lock her up,” at his rallies, threatening to turn the Justice Department against Clinton if elected.

“I served on Benghazi Com where we proved Hilliary possessed classified info. We didn’t raid her home,” former congressman Mike Pompeo, who served as Trump’s secretary of state and CIA director, said in a tweet that misspelled Clinton’s first name.

Top Senate Republicans leaders, including minority leader Mitch McConnell, had little to say about the raid. One exception was Senator John Barrasso, the party conference chairman, who tweeted: “Raiding a former president’s home is unprecedented. The Justice Department needs to quickly and transparently tell the American people who approved this raid and why it occurred.”

Trump himself and some Republican campaign committees seized on the unprecedented search of a former president’s home to raise campaign donations for their battle against Democrats and President Joe Biden’s agenda.

Trump was due to dine at his golf club in Bedminster, New Jersey, on Tuesday with Republican Representative Jim Banks, who chairs a leading conservative caucus, according to an aide. It was not clear whether they would be joined by other Republican lawmakers. 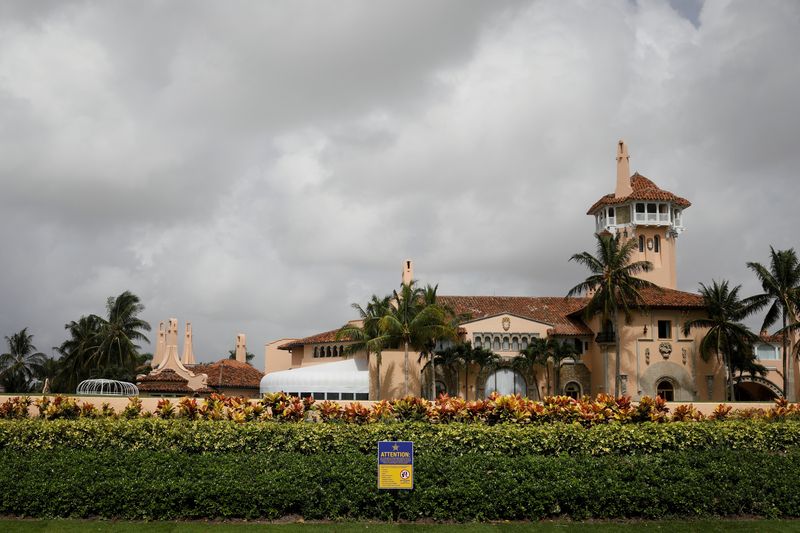