(This Aug 9 story corrects Rebecca Kleefisch’s title to show she is a former, not current, lieutenant governor)

(Reuters) – Republican voters in Wisconsin and Minnesota on Tuesday nominated abortion foes for governor, ensuring the issue will be central to what are expected to be two of the most high-profile races in November’s general election.

Michels’ nomination also represented a victory for former President Donald Trump, whose endorsement of Michels – along with millions of dollars in campaign spending from Michels’ personal wealth – helped propel him past former Lieutenant Governor Rebecca Kleefisch. Kleefisch, once seen as the favorite, had the backing of key establishment Republicans, including Mike Pence, Trump’s estranged former vice president.

Michels has falsely asserted that Trump, rather than Democratic President Joe Biden, won the state’s 2020 election, echoing the former president’s claims. He has also vowed to enforce a 19th-century abortion ban that went into effect after the U.S. Supreme Court in June eliminated a nationwide right to the procedure.

With a Republican-majority legislature, Michels could push through new abortion restrictions if elected. Democratic incumbent Tony Evers and his administration have filed litigation challenging the 1849 law while promising not to prosecute doctors who violate it.

In Minnesota, Jensen, who has also cast doubt on the seriousness of COVID-19, has said he would seek to ban most abortions. Minnesota has become a haven of sorts for residents of neighboring states where abortion bans went into effect after the Supreme Court ruling.

Last week’s Kansas ballot, which saw about 60% of voters support abortion rights, has raised Democrats’ hopes that the issue will mobilize their base and attract votes from independents and moderate Republicans. This follows the Supreme Court’s overturning of the Roe v. Wade decision that legalized abortion nationwide in 1973.

Unlike the Kansas initiative, which was open to voters of all parties, Tuesday’s Republican primaries will reflect the preference of just Republican voters.

Barnes, who scored endorsements during the primary campaign from liberal U.S. senators Bernie Sanders and Elizabeth Warren, would be the state’s first Black senator.

The battle for Johnson’s seat could determine which party controls the Senate. The chamber is split 50-50 with Democratic Vice President Kamala Harris casting tie-breaking votes.

While it is unclear whether Democrats will be able to hold their razor-thin Senate majority, Republicans are favored to win back control of the U.S. House of Representatives, which would enable them to block much of Biden’s legislative agenda and initiate politically damaging investigations.

For much of the year, Biden’s sagging popularity coupled with persistent inflation have weighed on Democrats’ chances. But the latest Reuters/Ipsos poll, completed on Tuesday, showed Biden’s approval rating rose for a third straight week to 40% – still historically low but at the highest level since early June after a string of Democratic legislative victories.

Wisconsin’s Senate and gubernatorial elections this year could serve as a preview of 2024, when Wisconsin will likely again be a major swing state in the presidential election. Trump, who still asserts falsely that Biden’s statewide win in 2020 was fraudulent, has strongly hinted that he intends to run again.

Republicans on Friday named Milwaukee as the site of their 2024 national convention, underscoring the state’s strategic importance.

Trump has endorsed hundreds of candidates this year in an effort to exert his influence over the Republican Party. Many of his picks, mostly incumbents, have prevailed, though some have not.

Minnesota also held a special election on Tuesday for the U.S. House seat left vacant when Republican Jim Hagedorn died in February after a battle with cancer.

In the state’s 5th Congressional District, Ilhan Omar, one of the most prominent liberal voices in Congress, survived an unexpectedly strong challenge from fellow Democrat Don Samuels, Edison projected.

Voters in Connecticut and Vermont were also choosing nominees for congressional and statewide races. 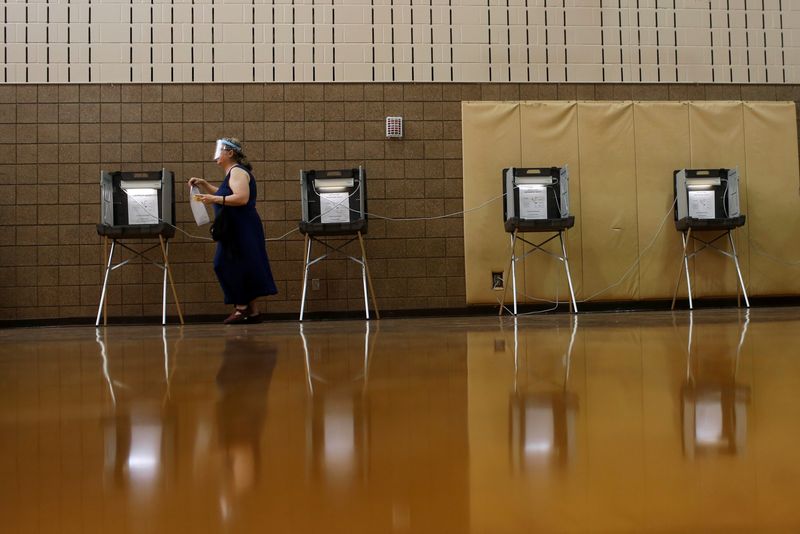