The trip came just days after the inauguration of Colombia’s new President Gustavo Petro, a former member of the M-19 guerrilla group, who promised to establish “total peace” in Colombia.

“We hope to resume talks with the National Liberation Army, ELN, in this land of peace in order to begin the path proposed by President Petro Urrego to achieve total peace,” Colombian Foreign Minister Alvaro Leyva said in a televised statement.

Representatives of the ELN, which was founded in 1964 by radical Catholic priests, have remained in Cuba since previous talks, begun under the government of Juan Manuel Santos, were called off in 2019.

Leyva traveled to Cuba accompanied by Colombia’s new high commissioner for peace, Danilo Rueda, Senator Ivan Cepeda, a member of Petro’s coalition and president of the chamber’s peace commission, and Carlos Ruiz Massieu, the special representative of the UN Secretary General for Colombia, as well as a representative of the Norwegian government.

“Regarding the negotiations with the ELN, we see an opportunity to resume dialogue and move towards peace in the way that the parties decide,” Cuba’s Foreign Minister Bruno Rodriguez said.

A second statement will be made on Friday, Leyva added.

The ELN, which is seen as radical and not centrally-controlled, said after Petro’s election victory that it was willing to talk to the new administration.

Petro has said discussions could begin where the Santos’ administration left off and that he would recognize the protocols agreed with help from guarantors Cuba, Chile, Venezuela, Norway and Brazil.

Talks between the ELN and the Santos government began in Ecuador, later moving to Cuba, but were called off by Santos’ successor Ivan Duque because the ELN refused to halt hostilities and killed 22 police cadets in a Bogota bomb attack.

Previous attempts at negotiations with the ELN, which has some 2,400 combatants and is accused of financing itself through drug trafficking, illegal mining and kidnapping, have not advanced partly because of dissent within its ranks.

Much of the ELN leadership in Cuba is older than many of its members and it is unclear how much sway they hold over units operating deep in Colombia’s countryside.

Petro has also promised to fully implement a 2016 peace deal with the now-demobilized Revolutionary Armed Forces of Colombia (FARC) rebels, as well as to seek de-arming of crime gangs in exchange for reduced sentences and information about drug trafficking.

The peace deal ended FARC’s role in the conflict but fighting continues across much of Colombia between the ELN and FARC fighters who reject the accord, crime gangs and the military. 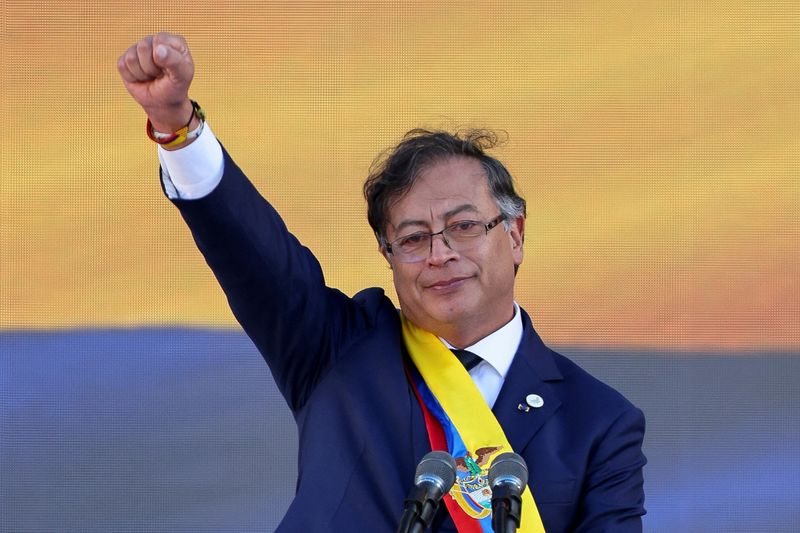