By Rachel More and Paul Carrel

Speaking at his first annual summer press conference, a tradition he inherited from predecessor Angela Merkel, Scholz said such measures would still mean sticking to the government’s debt brake – which limits federal borrowing to 0.35% of economic output per year but which has been suspended since 2020 – going into next year.

“Citizens can count on us not to abandon them,” he told journalists in Berlin in a press conference that lasted for more than 90 minutes.

Since taking power in December, Scholz has grappled with fallout from the war in Ukraine, which has threatened to tip Europe’s largest economy into recession, driven up gas prices and led to a shake-up of energy, defence and foreign policy.

The chancellor, 64, has also faced growing scrutiny in connection with the long-running “cum-ex” scandal, one of Germany’s biggest fraud investigations, dating back to his time as mayor of the northern port city of Hamburg.

Questioned about his role, Scholz on Thursday denied any impropriety and said he had no knowledge of how more than 200,000 euros ($206,680) was reportedly found in the safe of a party colleague.

Germany has accused Russia of waging economic warfare against Europe and cutting gas supplies on spurious pretexts in retaliation for punitive sanctions on Moscow.

Scholz’s Social Democrat-led government has introduced an energy levy to ease the strain for companies buckling under high gas prices, and is combining that with relief measures for struggling households.

But proposals put forward by Finance Minister Christian Lindner to raise income tax thresholds have sparked criticism from within the three-way ruling coalition this week.

Scholz threw his backing behind Lindner’s suggestions but separately rejected calls for Germany to impose a new profit tax, for example on oil companies.

On foreign policy, Scholz said Germany would tackle the energy crisis in solidarity with the European Union and that he was pushing for the construction of a new pipeline from Portugal through Spain and France to diversify European supplies.

Speaking about a proposal to cap the price of Russian oil, made at a Group of Seven summit that Scholz chaired in June, the chancellor said it would need buy-in from other countries to work.

He also stressed the importance of German companies not becoming too dependent on the Chinese market and said no date had yet been set for a visit to Beijing.

Scholz was criticized for dragging his feet over heavy weapons supplies to Ukraine in the first months of the war. But the country has considerably ramped up arms deliveries to Kyiv since then, and Scholz said Berlin would continue to do so.

Asked whether rising prices could trigger social unrest, Scholz said: “No, I don’t think that we will see unrest in this country in this form, on the grounds that Germany is a welfare state.”

Scholz took power when Merkel stepped down after dominating German politics for 16 years as chancellor. Asked about their relationship, Scholz said: “I like telephoning her, but I also like being chancellor.” 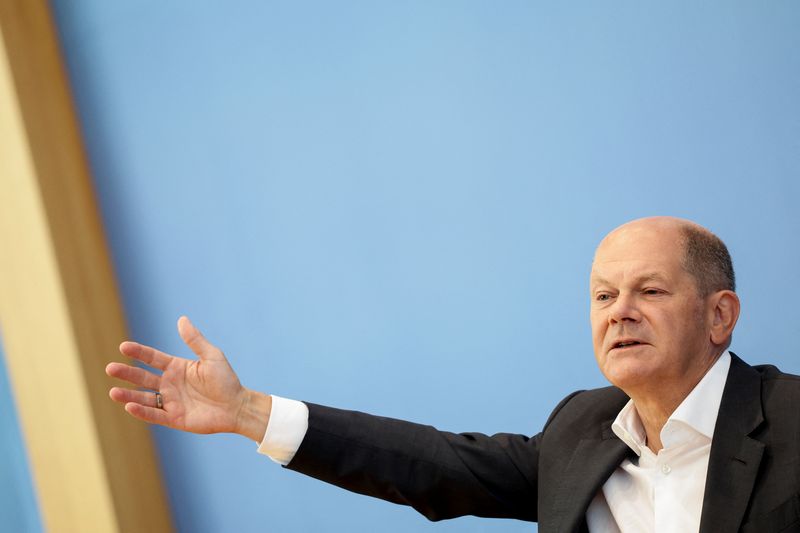