BERLIN -Gerhard Schroeder, who has become increasingly derided in Germany for his pro-Russian views, has filed a suit against Germany’s Bundestag lower house of parliament that seeks to reinstate his privileges as former chancellor, DPA reported.

Schroeder, 78, was stripped of his right to a publicly funded office in May, amid mounting dismay at his refusal to distance himself from Russian President Vladimir Putin following Russia’s invasion of Ukraine.

Schroeder’s lawyer Michael Nagel told German news agency DPA on Friday that he had filed a suit with the Berlin administrative court.

The court filing, seen by DPA, said that the decision to close Schroeder’s office and reallocate its remaining staff was “rather reminiscent of an absolutist princely state in terms of the way they were made” and should not be allowed to stand in a democratic constitutional country.

The Bundestag said it had not yet received the suit from the court and could not comment further.

While chancellor from 1998 to 2005, Schroeder forged the relationship with Putin that came to overshadow much of his career. Schroeder called Putin a close personal friend, and they spent long hours in discussion over drinks.

He travelled to Moscow in late July for a meeting with Putin, after which he said that Russia wanted a negotiated solution to the war in Ukraine. Ukrainian President Volodymyr Zelenskiy branded Schroeder’s behaviour as “disgusting”.

A champion of the Nord Stream pipeline which carries Russian gas to Germany under the Baltic Sea, Schroeder is chairman of the shareholders’ committee of Nord Stream AG, operator of the pipeline majority-owned by Russia’s Gazprom, according to LinkedIn.

After intense criticism, Schroeder stood down in May from the board of Russia’s state-owned oil company Rosneft and declined a nomination for a board position at Gazprom.

Earlier this week, Schroeder survived a move at the local chapter of his Social Democrat party to expel him, with a committee saying there was no evidence that he had broken party rules. 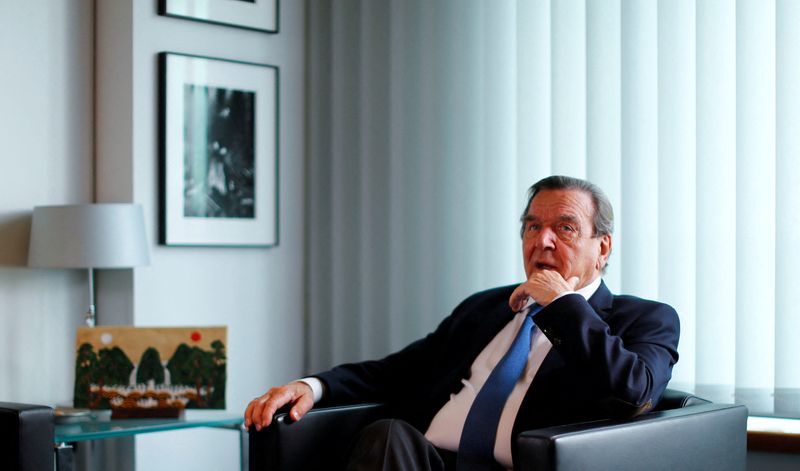