WELLINGTON – New Zealand’s central bank is expected to deliver its fourth straight half-point rate hike on Wednesday, but most economists see rates peaking below policymakers’ forecast after the most aggressive tightening in two decades to tame soaring inflation.

Some analysts are even looking for cuts in the official cash rate as soon as 12 months from now, which is keeping markets cautious as they wait to take the pulse of this week’s Reserve Bank of New Zealand’s policy statement.

Overall, he said in the past few months there has been a shift from markets being focused on inflation to now paying more attention on weakness in the economy.

A front-runner in withdrawing pandemic-era stimulus among its peers, the RBNZ’s hawkish stride to curb the highest inflation in three decades, at 7.3%, has seen rates already up 225 basis points since October.

All 23 economists in a Reuters poll forecast a 50 basis point rise at Wednesday’s policy review, taking the cash rate to 3.00% and marking the most aggressive tightening since 1999.

While the RBNZ has signalled plans to increase the rate to 4.00% by mid-2023, almost matching the U.S. Federal Reserve, few see it reaching that level. A handful were actually expecting rates to start easing by mid next year.

In June, the two-year swap rate topped out at 4.54% but in recent weeks that has dropped to sit at around 3.93% as expectations of when the cash rate will peak have fallen.

That shift in market pricing has been driven by signs of a weakening economy amid the tightening in financial conditions. Housing prices, a significant driver of inflation, have started to fall with prices last month recording their first year-on-year drop in more than a decade. (nL1N2ZM2MK)

Oil prices and a broad array of commodities have also begun to retreat from their recent record surge, while consumer and business sentiment remain gloomy. (nL1N2Z903B)

In the first quarter, New Zealand’s economy unexpectedly contracted due to a surge in COVID-19 cases, and the central bank has said its priority was on preventing inflation from getting out of hand even at the expense of growth.

Marcel Thieliant, senior economist at Capital Economics, said that he expects GDP growth in New Zealand will slow to a crawl by the end of the year, which should return inflation to the RBNZ’s 1%-3% target band by the middle of next year.

“Accordingly, we’re sticking to our forecast of 75bp of rate cuts from the second half of next year,” he said. 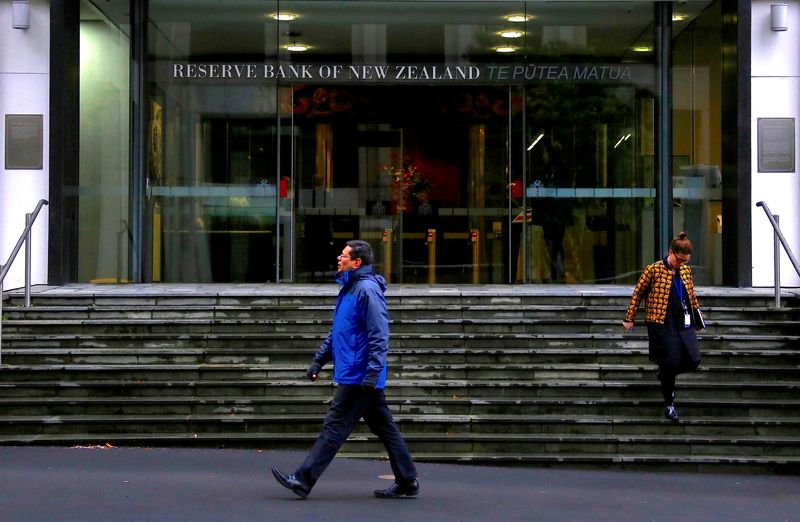