NEW YORK -The United Nations has the logistics and security capacity to support a visit by International Atomic Energy Agency (IAEA) inspectors to Ukraine’s Zaporizhzhia Nuclear Power Plant, a spokesman said, but a Russia diplomat imposed conditions, saying routing any mission through Ukraine’s capital was too dangerous.

U.N. spokesman Stephane Dujarric, speaking on Monday, also said: “The U.N. Secretariat has no authority to block or cancel any IAEA activities.”

Dujarric was responding to an accusation by Russia that U.N. security had blocked a visit by IAEA inspectors to Europe’s largest nuclear power plant, which Russia seized in March following its invasion of Ukraine on Feb. 24.

He said that “in close contact with the IAEA, the U.N. Secretariat has assessed that it has in Ukraine the logistics and security capacity to be able to support any IAEA mission to the Zaporizhzhia Nuclear Power Plant from Kyiv.”

In Moscow, Russian news agencies quoted a senior diplomat as saying that no such mission could pass through Kyiv, the Ukrainian capital, as proposed by the United Nations.

“Imagine what it means to pass through Kyiv — it means they get to the nuclear plant through the front line,” RIA news agency quoted Igor Vishnevetsky, deputy head of the foreign ministry’s nuclear proliferation and arms control department, as telling journalists.

“This is a huge risk, given that Ukraine’s armed forces are not all made up in the same way,” he was quoted as saying.

Russia describes its actions in Ukraine as a “special military operation” and accuses Kyiv’s military — and much of its political structures — as being beholden to nationalists and “Nazis.”

Tass news agency quoted Vishnevetsky as saying that any such mission had no mandate to address the “demilitarization” of the plant as demanded by Kyiv as it could only deal with “fulfillment of IAEA guarantees.”

U.N. Secretary-General Antonio Guterres on Thursday called for an end to military activity around the Zaporizhzhia nuclear power complex as Moscow and Kyiv blamed each other for shelling of the area.

Guterres spoke with Russian Defense Minister Sergei Shoigu on Monday about the conditions for the safe operations of the Zaporizhzhia, the United Nations and Russia said. 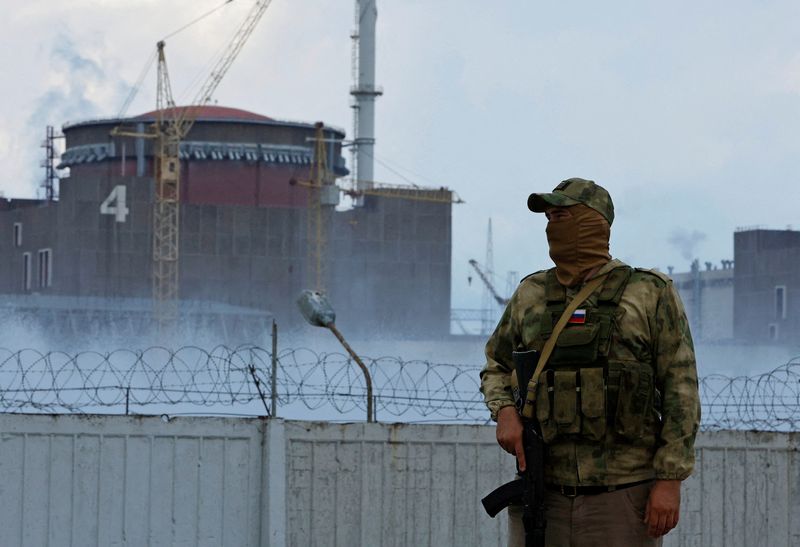