Rushdie, 75, was set to deliver a lecture on artistic freedom at the western New York venue last week when a man rushed the stage and stabbed the Indian-born writer. Rushdie has lived with a bounty on his head since his novel “The Satanic Verses” was published in 1988 and prompted Iran’s then supreme leader, Ayatollah Ruhollah Khomeini, to issue a fatwa urging Muslims to kill him.

The institution was seen as a haven where writers and artists gathered each summer without safety worries. However, the attack on Rushdie has prompted a rethink of security measures.

At the event during which Rushdie was attacked, members of the audience said there were no bag checks, metal detectors or similar security measures in place. Attendees purchased a pass to enter through the main gates and then had their passes scanned to get into the amphitheater.

The institution said on its website it will now be requiring photo identification for access to the grounds and there will be extra security screening at venues, including metal detectors prior to entering the amphitheater and other venues. It added there was no new or known imminent threat and that it was implementing additional protocols “out of an abundance of caution.”

The institution also said it will enforce a “no bags” policy in the amphitheater and other indoor venues.

The suspect who attacked Rushdie told the New York Post he respected Khomeini but would not say if he was inspired by the fatwa issued by the former Iranian leader.

The acclaimed author’s agent said on Sunday that Rushdie was off a ventilator and his health was improving.

(Reporting by Kanishka Singh in Washington;Editing by Elaine Hardcastle) 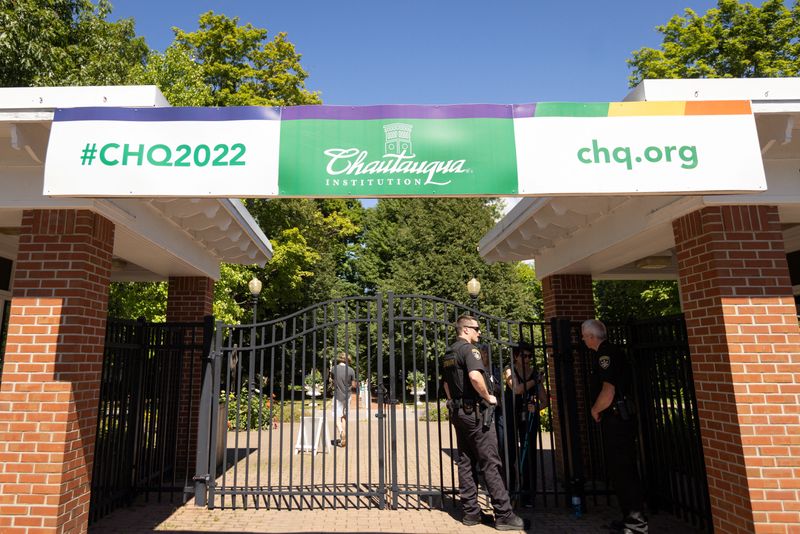