VATICAN CITY (Reuters) -Pope Francis has decided there is not sufficient evidence to open a Church investigation into Canadian Cardinal Marc Ouellet over allegations of sexual assault, the Vatican said in a statement on Thursday.

Ouellet, a prominent Vatican official, was named earlier this week in a class action lawsuit against the Quebec Catholic diocese that alleged cases of sexual assault by some 88 priests and staff working at the diocese starting in 1940.

In the filing in Quebec Superior Court, an anonymous complainant alleged that Ouellet inappropriately touched her, and made comments that made her feel uncomfortable between 2008 and 2010 when Ouellet was archbishop of Quebec and she was working as an intern in her 20s.

The Vatican was told about the allegations in 2021 and Francis appointed a priestly investigator, Jacques Servais, to look into the case. Servais subsequently advised against launching a full church investigation, the Vatican said.

“Following further relevant consultations, Pope Francis declared that there were not sufficient elements to open a canonical investigation for sexual assault by Cardinal Ouellet,” Vatican spokesman Matteo Bruni said in a statement.

Ouellet has not made any public comment about the allegations.

He heads the Vatican’s powerful Congregation for Bishops which advises the pope on which priests should be made bishops, and is on many experts’ short list of possible candidates to succeed Pope Francis after the pontiff dies or resigns.

Last month, he accompanied the pope on a six-day visit to Canada that focused on apologising to indigenous people for abuse in government schools run by the Roman Catholic Church.

The class action against the Quebec diocese was authorized in May to proceed. Ouellet himself faces no criminal charges over the allegations.

The suit includes the names of priests who served in the diocese and at educational institutions, including the Quebec seminary. Most of those named are deceased.

The Vatican said Servais had read the allegations made against Ouellet by the woman, and also interviewed her via Zoom.

“This person did not make any accusation that would provide the basis for … an investigation,” the Vatican cited Servais as saying. 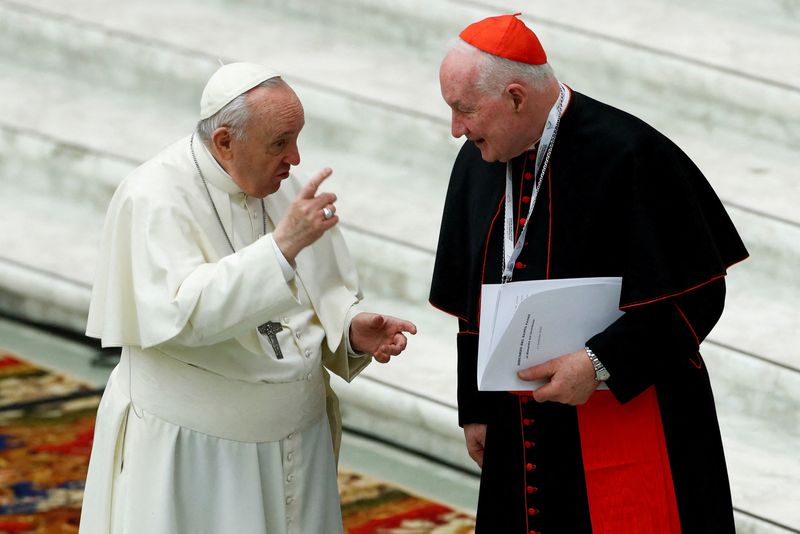