NEW YORK (Reuters) -The dollar edged back from a fresh two-decade high against the euro on Tuesday after data showed U.S. private sector activity was weaker than expected in August, prompting bets the Federal Reserve may be less aggressive in its rate hiking cycle.

The S&P Global flash composite purchasing managers index (PMI) for August dropped to its lowest since May 2020, as demand for services and manufacturing contracted for the second-straight month in the face of high inflation and tighter financial conditions.

The drop in demand was exactly what the Fed has been trying to achieve with its stiffest run of interest rate hikes since the 1980s. The Fed has hiked rates from near zero in March to the current range of 2.25% to 2.50%, with more increases planned in the months ahead, as it tries to pull inflation back from a 40-year high.

“The manufacturing and services PMI came in well below expectations which is raising concerns about how strong this economy is and supporting the narrative that Fed Chair (Jerome) Powell might be more inclined to deliver that pivot and slow the pace of tightening,” said Ed Moya, senior market analyst at Oanda.

Traders are currently pricing in a 47.5% chance the Fed will raise interest rates by 50 basis points (bps) in September and a 52.5% chance it will raise them by 75 bps.

That could change when Powell speaks on Friday in Jackson Hole, Wyoming, where central bankers from around the globe will be gathered for the Fed’s annual economic symposium.

With inflation still running hot, Powell will likely lay out a fairly hawkish outlook for monetary policy that could prompt traders’ to more strongly favor the likelihood of a 75 bps rate hike for September, said Matt Weller, global head of research at Forex.com and City Index.

If “Powell comes off as hawkish as we expect on Friday, traders are likely to hop back on the bullish dollar bandwagon sooner rather than later,” he said.

The euro was up 0.19% against the greenback at $0.99625, rising off a fresh two-decade low of $0.99005 hit earlier in the session on renewed concerns that an energy shock continue to stoke inflation, making it more likely that Europe will fall into a recession.

PMI data showed that business activity in Europe contracted less than forecast in August, though the outlook was still bleak.

The single currency is down around 12% so far this year, and has shed almost 3% in August.

China’s yuan meanwhile weakened to a two-year low and sterling briefly touched its weakest since March 2020.

China’s yuan fell to an almost two-year low of 6.853 per dollar as Beijing’s steps to easy policies to revive faltering growth and the Federal Reserve’s relentless tightening streak kept pressure on the Chinese currency. 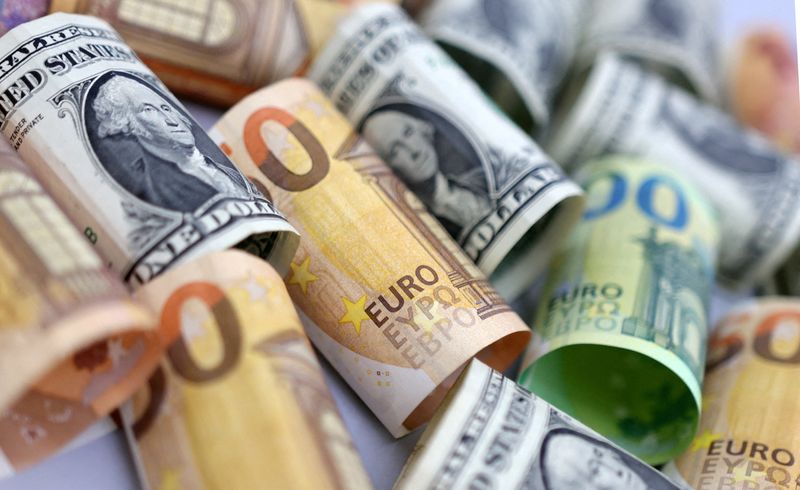