LONDON (Reuters) -Russian opposition politician Yevgeny Roizman was shown being detained at his home in a video published on social media on Wednesday, in the latest move by authorities to punish critics of the war in Ukraine.

Video of the arrest showed Roizman, former mayor of the Urals city of Yekaterinburg, being taken away by masked men in camouflage uniform.

Roizman was seen in the video telling reporters that he was being investigated under a law against discrediting the armed forces. He said he was being arrested “basically for one phrase, ‘the invasion of Ukraine'”.

Asked where he had said that, he replied: “I’ve said it everywhere and I’ll say it now.”

In a second video published by state-owned news agency RIA, Roizman said as he was led away: “In principle, the essence is that I called the war a war. That’s it. Unfortunately, I have no defence.”

State news agency TASS cited Yekaterinburg security services as confirming the reason for the arrest, saying Roizman was being investigated for “discrediting the Russian army”.

The offence, newly introduced after Russia’s Feb. 24 invasion of Ukraine, carries a prison sentence of up to five years.

Russia calls its actions in Ukraine a “special military operation” and people risk prosecution if they use the words “war” or “invasion”.

Human rights lawyer Pavel Chikov wrote on Telegram that Russian courts had so far dealt with about 3,500 cases of alleged discrediting of the armed forces, and nearly all those involved had been found guilty.

Related News:   ‘Most Americans Would Be Shocked’: James Comer Warns Of Biden Family’s ‘Connections’ To China Amid Document Debacle

Roizman, an outspoken supporter of jailed Kremlin critic Alexei Navalny, became one of Russia’s most prominent opposition figures in 2013 after he was elected mayor of Yekaterinburg, Russia’s fourth largest city. It was one of a string of opposition wins that capitalised on discontent with Vladimir Putin’s return as Russian president in 2012.

Popular and charismatic, Roizman was nevertheless controversial for an aggressive crackdown on drug users in the city. In 2018, he resigned as mayor after regional lawmakers voted to abolish the job in what Roizman said was a politically motivated move against him.

Since resigning, he has remained a popular figure in Yekaterinburg and nationally, known for outspoken comments sometimes expressed in crude language on social media.

In an unusual video message posted on Telegram, Yevgeny Kuyvashev, the Kremlin-loyal governor of the Sverdlovsk region which includes Yekaterinburg, said the ex-mayor deserved “justice and respect and I hope he will receive them”. He also said he expected that a local museum of religious icons that Roizman founded and ran would remain open.

Ivan Pavlov, an exiled lawyer known for defending Russian opposition figures, wrote on Telegram: “Strength and support to Yevgeny and everyone who remains in Russia and continues fighting against the junta.” 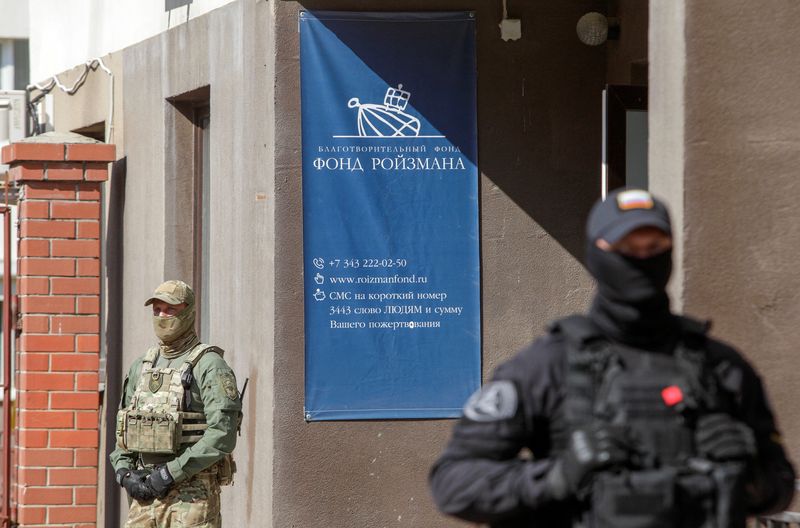