(Reuters) -Brazilian Economy Minister Paulo Guedes said on Thursday the government could sign a calamity decree if the Ukraine war continued, which would make room for a higher welfare program in 2023.

The maintenance of 600 reais ($114.88) monthly payments under the Auxílio Brasil program is one of the main promises of President Jair Bolsonaro in his quest for reelection in October, while he trails former president Luiz Inácio Lula da Silva in opinion polls.

But in next year’s budget bill, the government reduced cash handouts to 400 reais because keeping the current level would require circumventing the spending cap rule, and there is no legal provision for this so far.

Speaking at an event hosted by Sebrae, which promotes the competitiveness of small businesses, Guedes said a calamity decree could be signed if the war in Eastern Europe continued.

During the pandemic, the state of calamity made it possible for extraordinary expenses to be made without having to comply with the spending cap rule.

Later on Thursday, at a different event, he stressed that a calamity decree would not be the ministry’s “preferred” solution, as it would be temporary. A permanent action would involve taxing dividends received by the “super rich,” he added.

Still, Guedes said the payment of 600 reais next year is “guaranteed,” and said that dividend taxation would ensure sufficient funds for the program and compensate for greater income tax exemption for the poorest Brazilians – addressing two campaign promises made by Bolsonaro.

Guedes predicted the country’s gross debt would fall to 76.6% of gross domestic product after the development bank BNDES returns 90 billion reais ($17.26 billion) it owes the Treasury, which he said would happen soon.

Guedes also said the Federal Reserve is in talks with the Brazilian central bank to implement the Pix instant payment system in the United States.

Launched in November 2020, Pix is ​​free of charge for individuals but policymakers allow banks and payment institutions to freely define costs for merchants, both for transfers and receiving funds.

Its massive use by Brazilians has seen it surpass the level of transactions with credit and debit cards in the country. 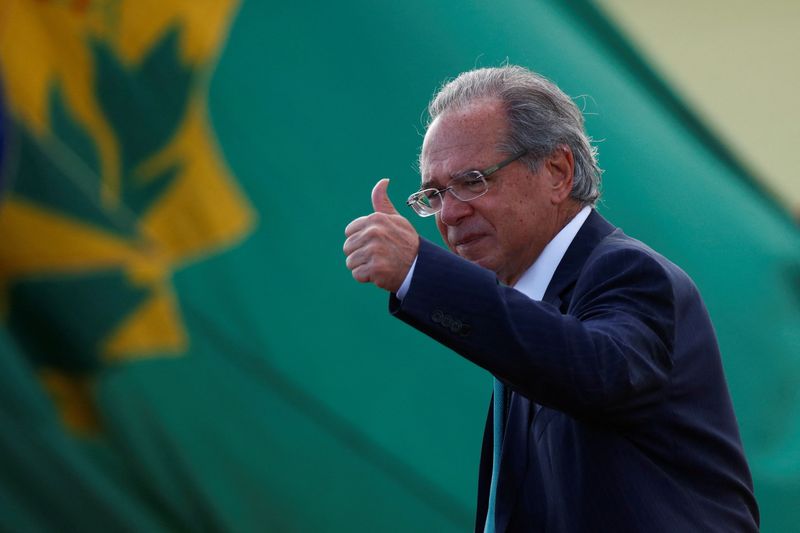