TAIPEI (Reuters) -China has been simulating attacks on U.S. Navy ships and is aiming to prevent foreign forces from coming to Taiwan’s aid in the event of a war, Taiwan’s defence ministry said in a strongly worded report raising the alarm on Beijing’s military designs.

Tensions between Taiwan and China have soared following a visit to Taipei last month by U.S. House Speaker Nancy Pelosi, which infuriated Beijing, which viewed it as an interference in its affairs.

China, which claims democratically-governed Taiwan as its own despite the strong objections of the Taipei government, carried out war games after Pelosi’s trip and is continuing its military activities near the island.

Taiwan’s defence ministry, in a report to parliament that was reviewed by Reuters, said China was continuing to strengthen its combat preparedness for an attack on the island. It was focusing on the first island chain, which runs from Japan through Taiwan, the Philippines and on to Borneo, enclosing China’s coastal seas.

There was no immediate response from Beijing to the report.

China has been “using combat drills to carry out simulated attacks on U.S. ships that enter into the first island chain”, the report said, and aims to gain strategic control of that island chain by 2035.

The United States has been regularly sailing naval ships into the South China Sea, sometimes close to Chinese-held islands, and also through the Taiwan Strait on what it calls freedom of navigation missions that always anger China.

Starting this year, the ministry said China has increased its military intimidation including drills that aim to undermine Taiwan’s morale and “force negotiations with a war” and “force a unification with arms”.

China could use special forces or agents to “decapitate” Taiwan’s command systems and damage infrastructure in an attack, and is capable of launching electronic attacks to disrupt communications and command systems, said the report which was dated Thursday.

China could also blockade Taiwan and cut off its energy supplies and economy, it added, but noted Beijing still had transport and logistics constraints to launch a full invasion.

China has, however, been drafting civilian transport ships for annual amphibious drills to boost logistics support for any Taiwan attack, the ministry said, adding it expected China’s newest aircraft carrier to enter service in 2025.

Russia’s invasion of Ukraine is also being studied by China and has prompted them to “modify” their Taiwan attack plans, the ministry said, without elaborating.

China has “substantially threatened our nation’s defence security and endangered peace, security and stability in the areas near the Taiwan Strait,” the report said, pointing to Chinese drills that have expanded beyond the first island chain, a move the ministry said was meant to stop foreign countries from intervening in an attack on Taiwan.

Taiwan has complained of repeated harassment by Chinese drones, and on Thursday shot one down that flew near a Taiwanese-controlled islet just off China’s coast. 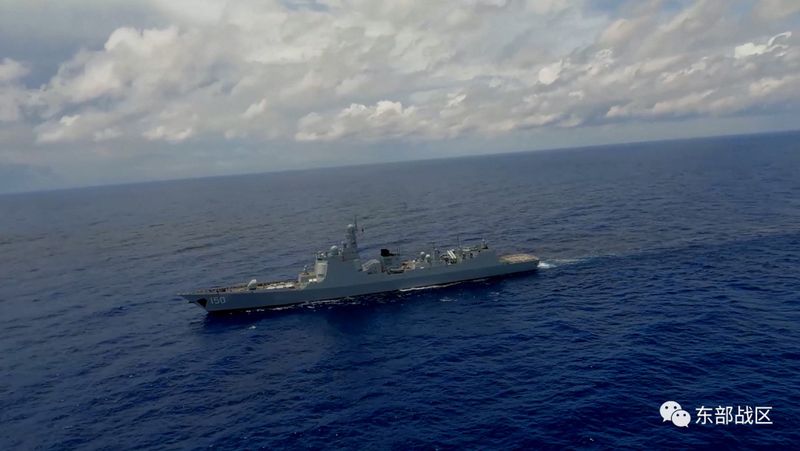