(Reuters) – Here is a timeline of U.S. conspiracy theorist Alex Jones’ falsehoods about the 2012 Sandy Hook mass shooting and the ensuing legal fallout as he faces trial in Connecticut to determine how much he must pay victims’ families for claiming the shooting was a hoax.

Jones has since admitted that the shooting took place.

April 2013 — Jones calls Sandy Hook a “government operation” with “inside job written all over it” during an Infowars broadcast, one of at least a dozen occasions when he and other Infowars contributors spread false claims about the shooting.

May 23, 2018 — Thirteen family members of Sandy Hook victims as well as one FBI agent sue Jones and four entities connected to Jones in Connecticut state court.

October 31, 2018 — Another Sandy Hook parent sues Jones and Free Speech Systems in Texas, where Jones’ radio show and webcast is based.

September 2021 — A Texas judge enters a default judgment finding Jones liable for defamation after he repeatedly flouted court orders and failed to turn over documents to the plaintiffs.

November 2021 — A judge presiding over the Connecticut case also enters a default judgment against Jones for failure to comply with court orders.

April 2022 — Five shell entities controlled by Jones file for bankruptcy protection in Texas, which would typically pause all lawsuits against them. The case was dismissed in June after the parents intervened, arguing that it was a stall tactic.

August 29, 2022 — Free Speech Systems agrees to face trial in Connecticut despite filing for bankruptcy in July, which would normally shield it from lawsuits.

(The story corrects May 23, 2018 entry to show that the plaintiffs include 13 family members of Sandy Hook victims and one FBI agent, not 14 family members.) 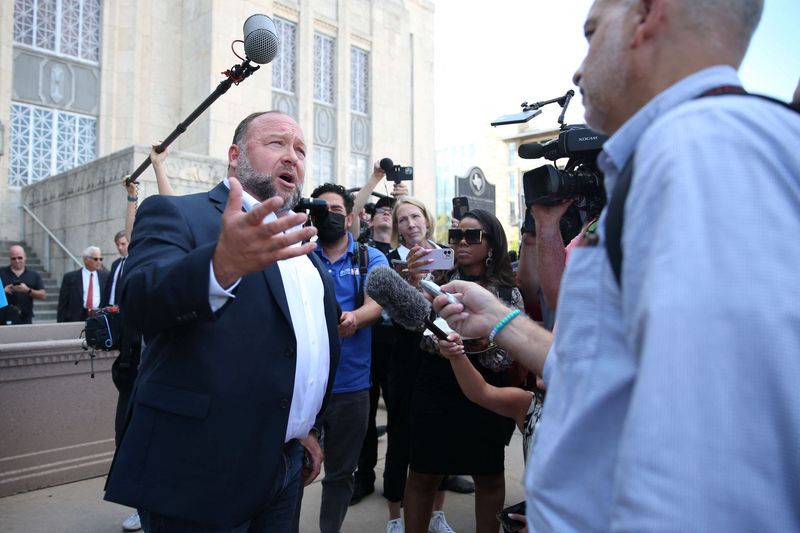