MIAMI (Reuters) – So many Florida teachers have abandoned their profession in recent years that the state is inviting military veterans with no prior teaching experience to lead classrooms while they earn education credentials.

Elsewhere across the United States as school resumed this August and September, districts have beamed virtual teachers into classrooms from several states away and offered bonuses to lure back retirees.

Education experts say teacher shortages they have been warning about for years grew worse during the coronavirus pandemic, when teachers who did not die or become gravely ill faced new stresses such as remote learning or exposure to potentially sick students.

To make up for the shortage, Florida Governor Ron DeSantis signed the Military Veterans Certification Pathway into law on June 9 after it sailed through both houses of the Florida legislature without any opposing votes. The law gives qualifying veterans a five-year teaching certificate and allows them to work as teachers while they earn their bachelor’s degrees.

In Florida, which according to the National Education Association has about 195,000 public schools instructional staff and an average daily attendance of 2.5 million students in 2021, 282 veterans applied to the Military Veterans Certification Pathway as of Aug. 24.

The measure has generated both enthusiastic support and sharp criticism, typical in a time of deep division in the United States around education and other issues.

TEACHERS AGAINST THE BILL

Instead of launching programs such as the Military Veterans Certification Pathway, the Florida Education Association teachers’ union has said states should stop insulting teachers and passing legislation that penalizes those who stray from conservative views on race or LGBTQ issues.

Related:  Sollers in talks to buy Mazda out of Russian joint venture

“If the governor thinks this (recruiting veterans) is going to solve the teacher shortage problem, he’s dead wrong. Because no one wants to come into a profession that’s being maligned every day, especially by the governor,” union President Andrew Spar said in August.

DeSantis’ office referred queries to the Florida Department of Education. Department spokesman Alex Lanfranconi said in a statement: “Union clowns are once again doing nothing but complaining, spreading misinformation and offering zero solutions for the teachers they ‘represent.'”

Marlon Greig, a teacher at Earlington Heights Elementary School in Miami, said he had one sibling in the U.S. Army and another in the Air Force “but I would not entrust them with my children” as teachers.

“It’s just not fair for someone to come into a classroom unqualified, unprepared to teach and shape young minds,” Greig said.

“Absolutely. There are teachers that come right out of college and make an immediate impact in the classroom,” Buggs said.

Two years ago, when the pandemic was still new in June 2020, the satisfied camp outnumbered the unhappy group, 53% to 45%.

“We lose too many long before retirement,” said Richard Ingersoll, a leading expert on education from the University of Pennsylvania. “We need to improve retention.”

The exact impact is unclear, according to experts awaiting current national data from the U.S. Education Department.

Linda Darling-Hammond, president of the Learning Policy Institute, a national independent think tank, said her researchers had flagged the teacher shortage as early as 2016.

“The single most important predictor of student achievement is the qualifications of their teachers,” Darling-Hammond said. “So when the teaching force is decimated in this way, you really do see a substantial hit on achievement.”

(Reporting by Maria Alejandra Cardonoa in Miami and Daniel Trotta in Carlsbad, Calif.; Editing by Donna Bryson and Josie Kao) 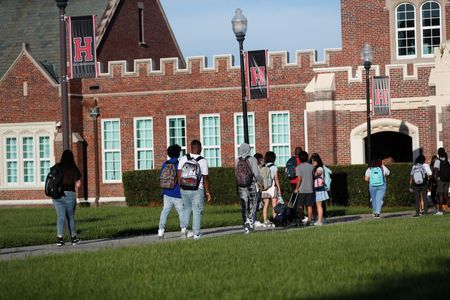