WASHINGTON (Reuters) -U.S. Energy Secretary Jennifer Granholm met with the governors of six states in the U.S. Northeast on Thursday to talk about their concerns about soaring fuel costs heading into winter, the Department of Energy said.

The meeting came after governors, including Charles Baker of Massachusetts, Janet Mills of Maine and Ned Lamont of Connecticut, wrote file:///C:/Users/8003938/AppData/Local/Microsoft/Windows/INetCache/Content.Outlook/EAB21553/incoming%20-%20Baker%20Lamont%20Mills%20Sununu%20McKee%20and%20Scott.pdf Granholm in July about their concerns about prices for liquefied natural gas (LNG) and other fuels in the wake of Russia’s invasion of Ukraine.

Participants in the meeting talked about ways to ensure adequate supplies of electricity and heating fuels in region which typically experiences tight energy markets in winter, a source at the DOE said.

The DOE has made sure contracts for LNG for industry and other consumers are in place. In addition, President Joe Biden’s infrastructure law last year included a $500 million boost in funding for the Low Income Home Energy Assistance Program, which helps U.S. consumers access heating fuel and weatherize their homes, and the administration has called on Congress for more funding.

“This meeting is an opportunity to talk about what has happened and how we can continue to stay really closely aligned to mitigate any risks on reliability and try to maintain affordability (of fuel) in the coming weeks and months,” the source said.

The New England governors said in the letter that the DOE should explore suspending the Jones Act, a law requiring goods moved between U.S. ports to be carried by U.S. staffed and flagged ships that are built domestically, for part or all of the upcoming winter.

They also urged the department to see how its heating oil and gasoline reserves in the Northeast, which hold a total of 2 million barrels of fuel, could be used this winter and to see about modernizing them given the region’s changing resource mix.

In response to a question about waiving the Jones Act, the source reiterated that LNG contracts have been ensured. “In the event that there is an issue where additional supplies of heating fuels are needed, we would work with the states as appropriate to see what tools are needed,” the source added.

Granholm “underscored the concern about the low levels of privately-held refined product inventories in key regions, including New England, and its ask of oil and gas companies to ensure they are building adequate inventories to handle disruptions from hurricanes or other events,” the DOE said in a statement about the meeting. 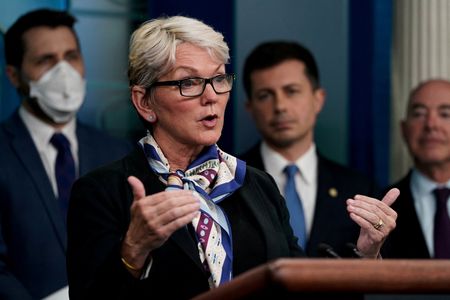