HONG KONG (Reuters) -An offshore bondholders’ group of cash-strapped Kaisa is offering up to $2 billion to acquire stalled housing projects of the Shenzhen-based developer to facilitate their completion, two people with direct knowledge of the matter said.

The takeover talks are in early stages, according to the people, who declined to be named as they were not authorised to speak to the media on this subject.

If successful, it would be the first foreign investor takeover of Chinese developers’ distressed residential assets in the latest wave of crises to hit the property sector over the past year. It also comes as authorities are scrambling to contain a mortgage boycott by homebuyers against stalled projects.

Kaisa Group, the second-largest U.S. dollar bond issuer among Chinese developers after China Evergrande Group, is in the process of restructuring its $12 billion offshore debt after defaulting on some bonds last year.

It is also struggling to repay its debt onshore and tap capital to complete its projects.

The offshore bondholder group, which is being represented by financial advisory group Lazard Ltd, made the offer to acquire Kaisa’s stalled projects to the developer’s advisor CITIC Securities, said the people.

The offshore bondholder group aims to offer up to $2 billion to buy some non-performing loans from Kaisa’s lenders, tied to unfinished housing projects, at a 20%-25% discount and provide the financing needed to complete the projects, they added.

The terms offered by the offshore creditors’ group are similar to those previously extended by Chinese asset managers when buying the distressed assets of some developers in the country, the people said.

As most of Kaisa’s projects are in top-tier Chinese cities, where housing prices are relatively resilient, bondholders expect to reap the profits after the completion of the stalled projects, said the two people.

They have also offered to split profits with Kaisa after certain returns, while the extra liquidity recouped could help the developer’s business and operations, which would also be beneficial for its debt restructuring, they added.

Evergrande and Kaisa have been at the centre of a stifling cash squeeze in the Chinese property sector, which accounts for a quarter of the economy and which has lurched from one crisis to another in the past year, roiling global and local markets.

A string of developers, including Evergrande and Kaisa, have defaulted on billions of dollars worth of dollar bond obligations since the second half of last year, forcing bondholders to enter into long and cumbersome debt restructuring processes.

It is unclear how many stalled projects would be covered by the bondholder group’s offer, and how many of them meet the purchase criteria laid out by the group.

The group proposed that, among other criteria, the projects must be located in first or second tier cities, have no off-balance sheet loans and own permit to pre-sale.

With a view to help revive onshore projects and advance the offshore restructuring talks, the bondholders’ group has also offered to take a 20% haircut on Kaisa’s dollar notes and inject equity capital, said the two people and two other sources.

Under the proposal, Kaisa would raise $550-$700 million by issuing new shares, the two people with direct knowledge of the matter said. While that would dilute Kaisa Chairman Kwok Ying Shing’s stake in the company, there would be a provision for him to raise his shareholding again, they added.

A person close to Kaisa had said at the time the agreements with state-owned companies were expected to help restore homebuyer and regulatory confidence in the embattled developer. 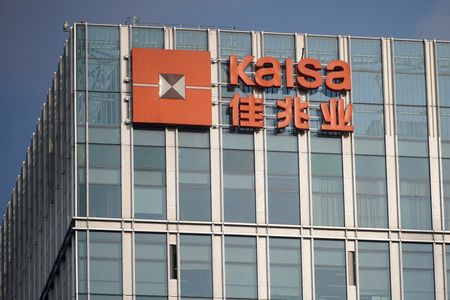