(Reuters) – The Acting U.N. Commissioner for Human Rights on Tuesday called for an impartial probe into the death of a woman in police custody in Iran who fell into a coma after being arrested by the country’s morality police.

The death of Mahsa Amini, a 22-year-old from Iran’s Kurdistan province, has sparked nationwide anger and protests in several cities, including in the capital, Tehran.

Police have said Amini fell ill as she waited with other women held by the morality police, who enforce strict rules in the Islamic republic requiring women to cover their hair and wear loose-fitting clothes in public.

But her father has repeatedly said his daughter had no health problems, adding that she had suffered bruises to her legs. He held the police responsible for her death.

“Mahsa Amini’s tragic death and allegations of torture and ill-treatment must be promptly, impartially and effectively investigated by an independent competent authority, that ensures, in particular, that her family has access to justice and truth,” acting U.N. commissioner Nada Al-Nashif said.

“The authorities must stop targeting, harassing, and detaining women who do not abide by the hijab rules,” Nashif added in a statement.

Five people were killed in Iran’s Kurdish region on Monday when security forces opened fire during protests over the death, a Kurdish rights group said. Reuters could not independently verify the report. There was no official confirmation of the deaths. 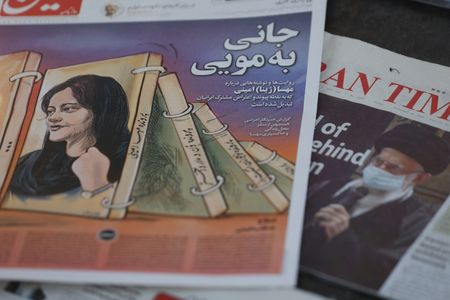