MOSCOW (Reuters) -Russian-installed officials in the Kherson region of Ukraine said they have decided to hold a referendum later this week on joining Russia and have urged the Kremlin to give its permission as soon as possible, the separatist head of the region said on Tuesday.

In a post on the Telegram messaging app, Vladimir Saldo, the Russian-appointed head of Kherson, said he hoped Kherson would become “a part of Russia, a fully-fledged subject of a united country”.

Russian forces control around 95% of Ukraine’s Kherson territory in the south of country.

Later on Tuesday, Russian news agencies reported the vote would take place between Sept. 23-27, in line with similar votes lined up in other areas of Ukraine controlled by Russian forces.

Officials in parts of Ukraine controlled by Russian forces, including the two breakaway Russian-backed regions of the Donbas – the Donetsk and Luhansk People’s Republics (DPR and LPR) – have stepped up preparations for long-discussed votes to join Russia this week in what appeared to be a coordinated move.

Saldo said Kherson joining Russia would “secure our region” and be a “triumph of historical justice”.

“I am sure that the Russian leadership will accept the results of the referendum,” he added.

The Kremlin has repeatedly said the issue is a matter for the local Russian-installed officials and citizens of the regions to decide.

Saldo’s remarks echoed those made by Kremlin ally and former President Dmitry Medvedev earlier on Tuesday, in which he called for the Kremlin to let the separatists join Russia.

Shortly after Saldo’s announcement about plans for a vote in Kherson, the head of Russia’s parliament said he would support the regions joining Russia.

“Today, we need to support the republics with which we have signed mutual assistance agreements,” Russia’s state Duma speaker Vyacheslav Volodin said, referring to agreements signed between Moscow and the DPR and LPR that paved the way for the Kremlin to dispatch tens of thousands of troops into Ukraine in February.

(Reporting by Reuters; editing by Guy Faulconbridge and Alex Richardson) 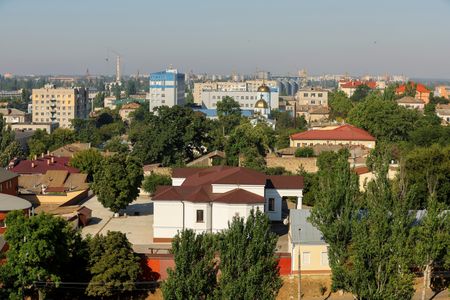