UNITED NATIONS (Reuters) -Iran’s hard-line president struck a defiant tone on Wednesday by demanding guarantees the United States not abandon any revived nuclear deal and by decrying “double standards” on human rights after the death of an Iranian woman in police custody.

Trump in 2018 abandoned the 2015 nuclear deal under which Iran had agreed to restrain its atomic program in return for relief from economic sanctions, prompting Tehran to begin violating the nuclear limits about a year later.

“We have before us the experience of America’s withdrawal from the (deal),” Raisi said at the U.N. General Assembly. “With that experience and this perspective, can we ignore the important issue of guarantees for a durable agreement?”

Raisi also sought to deflect criticism of last week’s death of 22-year-old Mahsa Amini, who was arrested by morality police in Tehran for “unsuitable attire,” which has unleashed protests that reflect simmering anger over personal freedoms in the Islamic Republic and an economy reeling from sanctions.

“The Islamic Republic of Iran rejects some of the double standards of some governments vis-a-vis human rights,” Raisi said. “(So long as) we have this double standard where attention is solely focused on one side and not all equally, we will not have true justice and fairness.

“Human rights belongs to all, but unfortunately it is trampled upon by many governments.” he added referring to the discovery of unmarked graves of indigenous people in Canada, the suffering of the Palestinians and images of migrant children held in cages in the United States. 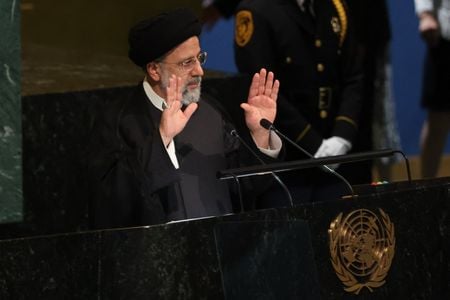