(Reuters) – A Georgia county has validated 15,000 to 20,000 registered voters whose status was challenged ahead of the Nov. 8 midterm election, officials said on Wednesday, leaving another 16,000 pending cases to resolve, according to the group leading the challenge.

The voter challenge campaign in Gwinnett County, a suburb of Atlanta, is led by VoterGA, which backs Donald Trump’s false claims that widespread fraud cost him the 2020 election. Supported by prominent allies of the former president, VoterGA has contested 37,000 voter registrations in the county of about 562,000 active voters.

Similar challenges are taking place in counties across Georgia, which has tight races for governor and U.S. senator on the ballot, and the queries have overwhelmed Gwinnett’s elections board.

Gwinnett County Elections Supervisor Zach Manifold told the county’s election board on Wednesday that a review of the challenges found 15,000 to 20,000 were eliminated from further scrutiny because the process by which those voters had their ballots delivered to them was legitimate.

Manifold said he had been informed just before the meeting that a further 6,275 challenges had been withdrawn by VoterGA.

VoterGA co-founder Garland Favorito told Reuters those challenges were withdrawn after a previous review by Gwinnett County determined they were legitimate, leaving a total of around 16,000 pending cases.

“I would be surprised if any more entries were removed (from the voter rolls) prior to the election,” Favorito said.

The effort follows Trump’s false claims that widespread fraud allowed now-President Joe Biden to win the state and the country as a whole in 2020. Trump’s claims have been rejected by multiple courts, state reviews and members of his former administration.

This year’s voter role challenges are being filed under Georgia’s Election Integrity Act of 2021, or SB 202, which made it easier for citizens to question the eligibility of registered voters.

VoterGA volunteers scoured public records to compile their claims, seeking to verify whether voters had improperly registered, moved away, had invalid addresses, or otherwise could not be accounted for.

The group is backed by the American Project, which was founded by former Trump National Security Adviser Michael Flynn and former Overstock.com Inc Chief Executive Patrick Byrne. The American Project announced in August it would sponsor lawsuits related to claims about the 2020 election in Georgia, including several involving VoterGA and Favorito.

Favorito said he did not vote for Trump and has never met Flynn or Byrne but welcomes their help.

Voting rights advocates including the American Civil Liberties Union and All Voting is Local say that VoterGA is abusing the law, which they say was intended to enable citizens with personal knowledge of an irregularity to report it, such as when a neighbor moves away and is still registered to vote locally.

The group is bringing “tens of thousands of what we would call baseless challenges that take up the resources of offices that really have better things to be doing at this time,” said Vasu Abhiraman, senior policy counsel for the ACLU of Georgia. 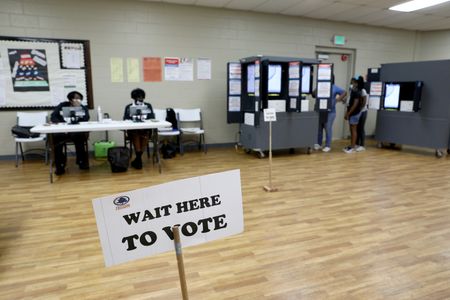