By Valerie Volcovici and Timothy Gardner

PITTSBURGH/WASHINGTON (Reuters) -U.S. Senator Joe Manchin on Friday warned that bipartisan opposition to his bill to overhaul energy permitting could derail his plan to attach it to temporary spending legislation and pass it by the end of the month.

Manchin, a West Virginia centrist Democrat important swing vote in the 50-50 Senate, will likely need 10 Republicans for the permitting bill he introduced this week. The bill would speed approvals of fossil fuel projects like natural gas pipelines but also for electricity transmission lines needed to bring power from wind and solar farms to cities.

However, getting enough support to include it in the spending bill is an uphill battle, with opposition from Republicans who want a bill more favorable to fossil fuels and progressive Democrats who fear the speeding up of permitting will degrade bedrock environmental laws and harm communities overburdened by pollution. Emissions from fossil fuel projects are a major cause of climate change.

“By next week we’ll either have a permitting process that accelerates and lets us compete on a global basis of how we do things and bring things to market or not and politics get in the way,” Manchin said at the Global Clean Energy Action Forum in Pittsburgh.

He said it will take “an awful lot of heavy lifting” over the next two or three days to overcome opposition by “strange bedfellows” ranging from progressive Senator Bernie Sanders to Senate Minority Leader Mitch McConnell.

The permitting reform bill comes as a result of a compromise Manchin made with Senate Majority Leader Chuck Schumer to secure the West Virginian’s support for the Inflation Reduction Act, a $430 billion bill seen as the biggest climate package in U.S. history, designed to cut domestic greenhouse gas emissions and lower prescription drug prices.

Manchin, who was interrupted by protesters opposed to the fossil fuel focus of his permitting plan, said if Congress fails to reform the permitting process, it would jeopardize the clean energy investments the larger bill incentivizes.

“With the Inflation Reduction Act (IRA), everything’s based on a 10-year window. If it takes seven to eight years or longer to permit something, we are going to miss the window for having those investments come to fruition,” he told the conference.

“We are very excited at DOE about the potential for streamlining permitting on clean energy projects,” Granholm told reporters.

She said the permitting deal holds the “greatest promise” for delivering the administration’s goal of achieving 100% clean electricity by 2035.

Heather Zichal, the chief executive of American Clean Power said without permitting reform such as Manchin’s bill, there will be more carbon emissions, less money invested in the energy transition and fewer clean energy jobs expected to result from the IRA.

“We must put politics aside and come together to pass common-sense and overdue permitting reforms,” Zichal said in an opinion piece in The Hill. “As Congress considers potential reforms to the permitting system, we can’t let this unprecedented opportunity pass us by.”

An aide to Schumer on Thursday said a procedural vote on the government funding bill is expected to take place on Tuesday.

Congress faces a Sept. 30 deadline to pass legislation to approve funding to keep the government operating beyond the current fiscal year. 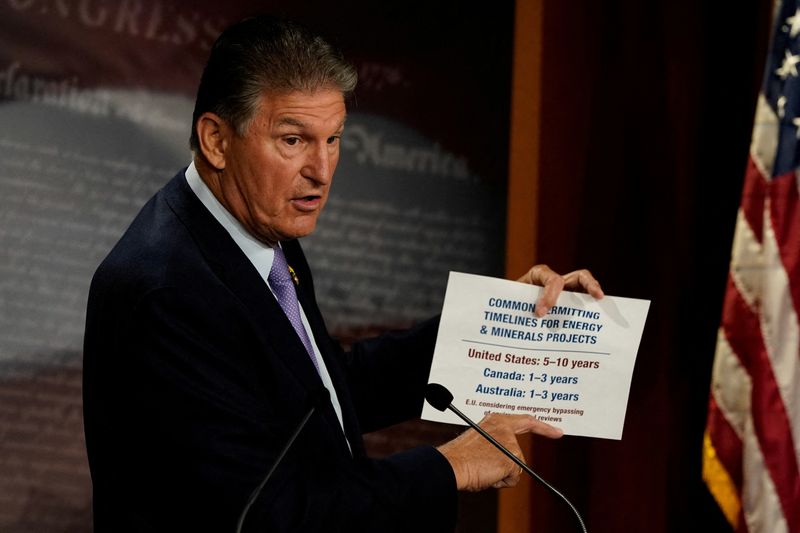 Leaders of China, Japan say it is important to develop ties