By Muvija M and Aiden Nulty

LONDON (Reuters) – As a drizzle fell over a grey autumnal London, and the pound plummeted on traders’ screens, U.S. tourist Heather Davidson saw one gleaming bright spot on her horizon – the chance of ever cheaper treats in Covent Garden’s boutiques.

Across town, the capital’s financial district was still reeling from the impact of new finance minister Kwasi Kwarteng’s tax cuts which, as the biggest since 1972, will be funded by huge government borrowing.

Sterling plunged after the cuts were announced on Friday and fell again on Monday to a record low. A lot for the bankers to ponder. But the sums were simpler for the tourists. As the pound depreciated in Londoners’ pockets, the buying power of the visitors’ currencies soared.

“Yeah, as you’re telling me this, I’m thinking oh what does that mean for me now and some of the fun things,” said Davidson, 61, in a light green raincoat and purple-framed glasses, out on a spree close to Buckingham Palace.

“I was just in Covent Garden and walking along the shops there and deliberately not going in some places. Maybe I’ll go back.”

Across town, grey-suited workers out earning their salaries paid in pounds were much less sanguine.

“I think it is obvious that there is some sort of recession coming, if it is not already here,” said Jason Emery, programme manager at an IT firm in the City of London.

“We just have to work through it. Arguably you have to keep spending to try and bring it back. If we can get through Christmas and Q1 (first three months of 2023), we might be alright.”

IT consultant Antheia Lou was worried about the broader economy, rising borrowing rates and the cost of imports.

“I just wonder how the government will tackle it or the Bank of England, I don’t know if they will control the rate or print more money.”

And politics was never far from the surface.

Retired trade union official Mick McTiernan saw the tax cuts and the rest of Kwarteng’s package as a bid from the Conservative government to please its wealthy donors.

“It is robbing from the poorest in society and giving the money to the richest. It is complete nonsense. And looking at the way the pound has been going today, it is going to end up in a complete catastrophe,” he said.

Any catastrophe was far down the road for the holidaymakers.

“That’s a big difference – when you get more bang for your buck that makes people want to travel and that’s the thing,” said David Appleby from Sydney, Australia.

Another visitor from Australia, Tony Cosford, was busy totting up the figures.

“I have been here four weeks. The change in exchange rate is round about 5% so I will get 5% more. It enables me to buy another pint,” he said, with a wry smile. 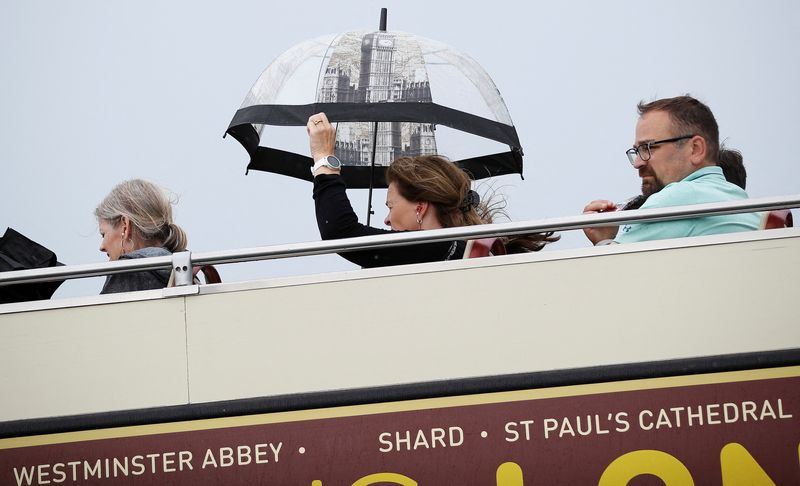