By Guy Faulconbridge and Andrew Osborn

LONDON (Reuters) – President Vladimir Putin’s latest warning that he is ready to use nuclear weapons to defend Russia amid the war in Ukraine has made a troubling question much more urgent: Is the former KGB spy bluffing?

Putin cautioned it was no bluff, and Western politicians, diplomats and nuclear weapons experts are divided. Some say he could use one or more smaller, tactical nuclear weapons to try to stave off military defeat, protect his presidency, scare off the West or intimidate Kyiv into capitulation.

Putin’s warning, which was followed by a more specific threat to use a nuclear weapon in Ukraine from an ally, might mean the Kremlin is considering an escalation after Russia annexes four Ukrainian regions which it only partly occupies.

Russia’s parliament is expected to declare the regions part of Russia on Oct. 4. Once that happens the way would be clear, from Moscow’s viewpoint, for a possible defensive strike if it felt the territory was under serious threat.

Breaking the nuclear taboo would be a sign of desperation, however, so whether or not Putin does go nuclear may ultimately depend on how cornered he feels in a conflict which has, thus far, humbled rather than defeated a former superpower.

Putin controls the world’s largest nuclear arsenal, including a new generation of hypersonic weapons and ten times more tactical nuclear weapons than the West, and the United States and the NATO military alliance are taking him seriously.

“If the choice for Russia is fighting a losing war, and losing badly and Putin falling, or some kind of nuclear demonstration, I wouldn’t bet that they wouldn’t go for the nuclear demonstration,” Tony Brenton, a former British ambassador to Russia, told Reuters in August, before Putin stepped up his warnings.

In his most recent comments, Putin explicitly warned the West that Russia would use all available means to defend Russian territory and accused the West of discussing a potential nuclear attack on Russia.

“This is not a bluff. And those who try to blackmail us with nuclear weapons should know that the weathervane can turn and point towards them,” he said.

Such blunt Kremlin rhetoric is very different to the much more nuanced nuclear signals preferred by late Soviet leaders after Nikita Khrushchev took the world to the brink of nuclear war in the 1962 Cuban Missile Crisis.

Washington has not spelled out its likely response, but using a nuclear device could trigger a nuclear escalation, which is why most experts believe a massive conventional attack on Russian military assets would be more likely.

Asked if Putin was moving towards a nuclear attack, CIA Director William Burns told CBS on Tuesday: “We have to take very seriously his kind of threats given everything that’s at stake.”

Burns, though, said U.S. intelligence had no practical evidence that Putin was moving towards using tactical nuclear weapons imminently.

If Putin did order a nuclear strike inside Ukraine, it would be the first use of nuclear weapons in battle since the United States unleashed the atomic bomb attacks on the Japanese cities of Hiroshima and Nagasaki in August 1945.

Shorter-range lower-yield weapons launched by sea, air or land could theoretically be used against Ukrainian military targets, though their effectiveness in such a scenario is a matter of debate among military experts.

Another option, they say, would be for Putin to detonate such a weapon over a remote and unpopulated area or a body of water, like the Black Sea, as a chilling demonstration of intent.

The radioactive fallout from a small Russian tactical weapon could be limited to around a kilometre (half a mile), but the psychological and geopolitical impact would be felt across the world.

“Putin is playing a high-stakes game of chicken,” said Richard K. Betts, professor of war and peace studies at Columbia University. “If I had to bet money, I would probably bet 3:2 that he would not go nuclear even if he feels desperate, but those are not good odds.”

Lawrence Freedman, Emeritus Professor of War Studies at King’s College London, said there was no evidence Moscow was gearing up for such a nuclear strike at the moment and that Washington would know “pretty quickly” if it was.

He said it would be a mistake to be complacent about Putin’s nuclear warnings, but that he did not think it would make sense for Putin to go nuclear to defend newly-annexed territory.

“To start a nuclear war to break this taboo that has lasted since August 1945 for such small gains when the Ukrainians have said they won’t stop fighting anyway, and even if the battle stopped he’d find these territories impossible to pacify, would seem like a very odd thing to do,” said Freedman.

Given the irrational nature of using a nuclear weapon in the circumstances, taking the threat seriously entailed assuming it would be an emotional act of desperation from Putin in a situation where he felt threatened, he added.

Betts of Columbia University said: “You can see the pressures he is under and the rationales in his mind about how the use of a small nuclear weapon might work for his purposes to reverse the situation, frighten the West, and get him out of the bind he is in.”

Putin says Russia is now fighting for its existence in Ukraine after years of humiliation at the hands of an arrogant West which wants to destroy the former superpower.

“In its aggressive anti-Russian policy, the West has crossed every line,” Putin said in his Sept. 21 warning.

Russia’s invasion of Ukraine has killed tens of thousands, fuelled global inflation and triggered the worst confrontation with the West since the height of the Cold War.

Seven months on, Putin’s forces are facing a fierce counteroffensive from Ukrainian forces armed and trained by Western countries. The better it goes for Ukraine on the battlefield, the higher the chance that Putin might go nuclear, said Betts.

Russia’s nuclear doctrine allows for a nuclear strike after “aggression against the Russian Federation with conventional weapons when the very existence of the state is threatened”.

Kremlin hawks say the West is trying to topple Putin, who has held power in Russia since 1999.

U.S. President Joe Biden said in March that Putin “cannot remain in power” in comments the White House said were meant to prepare the world’s democracies for an extended conflict over Ukraine, not back regime change in Russia.

And in May, Biden said he was trying to work out what to do about the fact that Putin did not appear to have a way out of the war.

Ukrainian President Volodymyr Zelenskiy had previously dismissed the Russian warnings, but told CBS on Sunday that Putin could now be serious.

“Look, maybe yesterday, it was bluff. Now it could be a reality.” 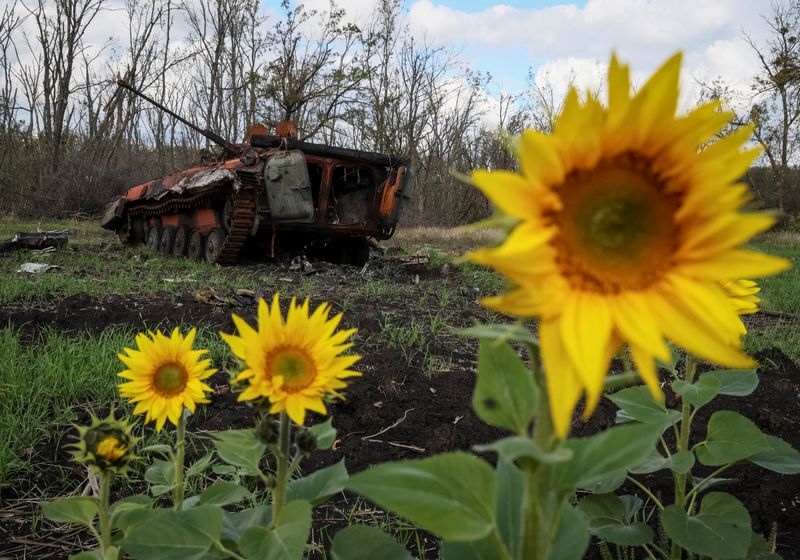