WASHINGTON (Reuters) -A jury was seated on Thursday in the criminal trial of Oath Keepers founder Stewart Rhodes and four associates over their alleged roles in the Jan. 6, 2021, attack on the U.S. Capitol, paving the way for prosecutors to make opening statements.

Opening arguments in the case are expected to begin on Monday. The jury, which consists of seven women and nine men, will have 12 members plus four alternates.

Jury members include federal employees from the departments of State and Homeland Security, a youth center worker, a defense contractor and a healthcare consultant.

Most of the jurors told the court they have not extensively tracked news coverage of the 2021 attack, in which then-President Donald Trump’s supporters stormed the Capitol in a failed bid to block Congress from certifying Democrat Joe Biden’s 2020 election victory.

Trump falsely claimed the election had been stolen from him through widespread fraud. Five people died during and shortly after the riot and about 140 police were injured.

The trial marks the most high-profile prosecution so far in the Justice Department’s investigation into the deadly attack. The Oath Keepers are a far-right, anti-government militia that is mostly made up of current and former U.S. military and law enforcement personnel.

Rhodes and his co-defendants Kelly Meggs, Thomas Caldwell, Jessica Watkins and Kenneth Harrelson are the first people in more than 10 years to face federal charges of seditious conspiracy under a Civil War-era statute that is rarely prosecuted and carries a maximum sentence of 20 years in prison.

Seditious conspiracy is defined as two or more people plotting “to overthrow, put down or to destroy by force the government of the United States.”

In addition to seditious conspiracy, the five accused Oath Keeper defendants also face charges of conspiring to obstruct and of obstructing an official proceeding, which carries a sentence of up to 20 years in prison, and conspiring to prevent an officer from discharging duties.

The defendants who physically entered the Capitol building – Watkins, Meggs and Harrelson – are also charged with property destruction. Watkins separately faces a civil disorder charge, while the other four are each charged with tampering for allegedly trying to destroy evidence.

The indictment against the five alleges they plotted to use force to oppose the peaceful transfer of power from Trump to Biden. Prosecutors have also said the defendants trained and planned for Jan. 6, the day Congress met to certify Biden’s win.

Prosecutors say Rhodes led and coordinated the alleged plot, which involved the defendants setting up a “quick reaction force” and stockpiling weapons at a northern Virginia hotel. 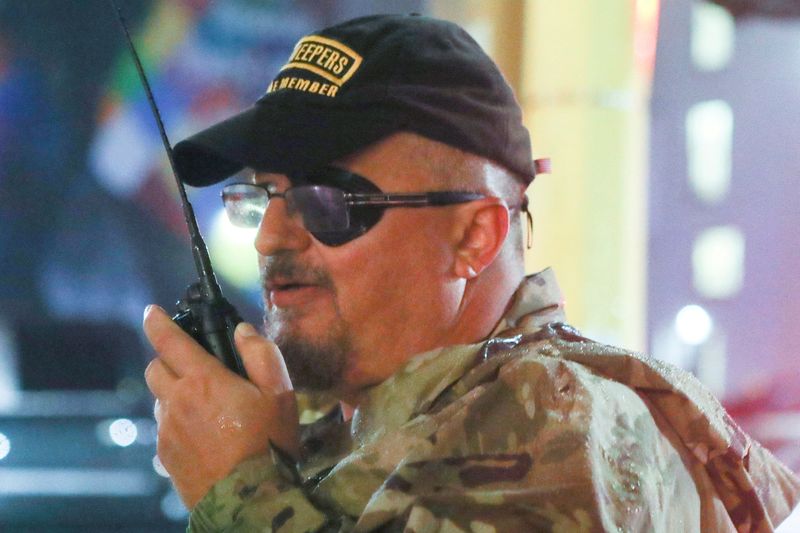