BEIJING (Reuters) – China’s factory activity eked out growth in September, but a slowdown in services sector growth and a downbeat private manufacturing survey pointed to further cooling as the economy grapples with COVID-19 curbs and softening global demand.

The index’s return to growth, after two months of contraction, was helped by recent easing measures, but the private Caixin survey showed factory activity slumped more quickly in September and the official survey showed a sharp slowdown in services sector activity growth.

Signs that the world’s second-largest economy is struggling to regain traction after narrowly avoiding contraction in the second quarter, could add to concerns about a global recession, as major central banks embark on the most aggressive round of rate rises in decades.

“The surveys suggest that China’s economy continued to lose momentum in September, with the global downturn weighing on exports and virus disruptions dealing a fresh blow to services activity,” Zichun Huang, an economist at Capital Economics, said in a note.

China’s official manufacturing survey showed factory activity grew marginally in September, beating expectations for a reading of 49.6 in a Reuters poll of economists, and coming in above the 50-point mark that separates contraction from growth. China’s government has rolled out more than 50 policy measures since late May.

“With the basket of economic policies coming into effect and the impacts of heatwaves fading, the manufacturing sector has picked up, leading to the PMI return to expansionary territory,” said Zhao Qinghe, a senior statistician at the NBS, in a statement.

The official survey showed non-manufacturing PMI falling to 50.6 in September from 52.6 in August. The official composite PMI, which includes manufacturing and services, fell to 50.9 from 51.7.

The private Caixin survey also released on Friday showed factory activity contracted at a sharper pace in September, with indexes for output, new orders and employment all declining due to weak demand. The Caixin survey typically covers smaller, export-oriented companies.

The releases come as the yuan hit its weakest level since the global financial crisis in 2008 this week even as the People’s Bank of China (PBOC) made betting against the yuan more expensive and warned against speculative yuan trading.

“Pressure on the yuan also means that the PBOC is constrained in its ability to provide monetary support,” Huang added.

The official manufacturing PMI survey showed the new export orders index dropping to 47.0 from 48.1 in August, a trend also reflected in the private Caixin survey. External demand has been hit by rising interest rates, high inflation and the war in Ukraine.

“If the external demand weakens further, the Chinese economy will have to turn more emphasis to domestic demand.”

The release is one of the last official economic indicators to be announced before China’s ruling Communist Party Congress in mid-October. 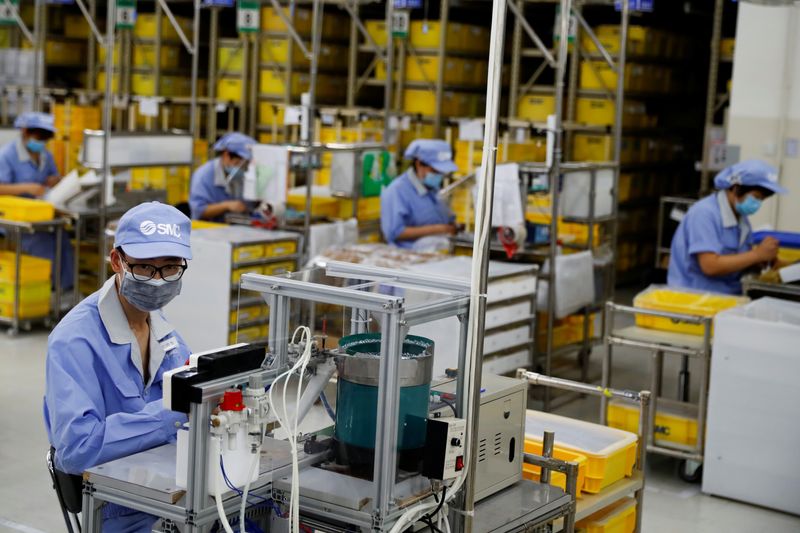