ZAPORIZHZHIA, Ukraine (Reuters) -A defiant Vladimir Putin proclaimed Russia’s annexation of a swathe of Ukraine in a pomp-filled Kremlin ceremony, promising Moscow would triumph in its “special military operation” even as he faced a potentially serious new military reversal.

The proclamation of Russian rule over 15% of Ukraine – the biggest annexation in Europe since World War Two – was roundly rejected by Ukraine and Western countries as illegal. The United States, Britain and Canada announced new sanctions.

Ukrainian President Volodymr Zelenskiy said his country had submitted a fast track application to join the NATO military alliance and that he would not hold peace talks with Russia while Putin was still president.

Putin’s proclamation coincided with Russian forces in one of the four regions being annexed facing encirclement by Ukrainian troops, showing how tenuous Russia’s grip is on some of territory it is claiming.

In one of his toughest anti-American speeches in more than two decades in power, Putin signalled he was ready to continue what he called a battle for a “greater historical Russia”, slammed the West as out to destroy Russia and, without evidence, accused Washington and its allies of blowing up the Nord Stream gas pipelines.

But U.S. President Joe Biden said it “was a deliberate act of sabotage and now the Russians are pumping out disinformation and lies,” adding that Washington and its allies would send divers to find out what happened.

The four Ukrainian regions – Donetsk, Luhansk, Kherson and Zaporizhzhia – that Putin said Russia was absorbing had made a historic choice, Putin said.

“They have made a choice to be with their people, their motherland, to live with its fate, and to triumph with it. Truth is on our side. Russia is with us!” Putin told his country’s political elite, who had gathered in one of the Kremlin’s grandest halls to watch him sign the annexation documents.

Russia organised so-called referendums, which were denounced by Kyiv and Western governments as illegal and coercive.

“We will defend our land with all our strength and all our means,” he added, calling on “the Kyiv regime to immediately cease hostilities and return to the negotiation table”.

In Ukraine, Zelenskiy said he was only ready for peace talks if and when Russia had a new president.

He also announced that Ukraine was formally applying for fast-track membership of NATO, something Moscow fiercely opposes, and accused Russia of redrawing borders “using murder, blackmail, mistreatment and lies”.

He said, however, that Kyiv remained committed to the idea of co-existence with Russia “on equal, honest, dignified and fair conditions”.

“Clearly, with this Russian president it is impossible. He does not know what dignity and honesty are. Therefore, we are ready for a dialogue with Russia, but with another president of Russia,” Zelenskiy said.

Putin said the United States had set a precedent when it had dropped two atomic bombs on Japan in 1945, while stopping short of issuing new nuclear warnings against Ukraine himself, something he has done more than once in recent weeks.

U.S. Secretary of State Antony Blinken said the United States had not yet seen Russia take any action that suggested it was contemplating the use of nuclear weapons, despite what he called Putin’s “loose talk.”

The annexation ceremony culminated in Putin, 69, chanting “Russia! Russia!” as he clasped the hands of the Russian-backed officials he wants to run the annexed regions.

Biden said new U.S. sanctions would hurt those who provided political or economic support to the annexation drive.

“We will rally the international community to both denounce these moves and to hold Russia accountable,” Biden said in a statement, promising to continue to supply Ukraine with equipment to defend itself.

NATO chief Jens Stoltenberg accused Putin of provoking “the most serious escalation” of the war since Russia began its invasion on Feb. 24, but said he would not succeed in deterring the alliance from supporting Kyiv.

A resolution introduced by the United States and Albania at the United Nations Security Council condemning Russia’s proclaimed annexation of parts of Ukraine was rejected on Friday after Russia exercised its veto.

Blinken earlier on Friday promised that should Russia block the resolution, Washington would ask the 193-member U.N. General Assembly to condemn the declared annexation and referendums.

In eastern Donetsk region, Russia’s garrison in the town of Lyman was in serious trouble with reports from both sides saying Russian forces were nearly surrounded.

Ukraine said it had all the supply routes to the Russian stronghold in the crosshairs of its artillery in the east, and told Moscow it would have to appeal to Kyiv if it wanted its forces to be allowed out.

The encirclement could leave Ukrainian forces an open path to seize more territory in Luhansk and Donetsk provinces, captured earlier in some of the war’s bitterest fighting.

“We have significant results in the east of our country … everyone has heard what is happening in Lyman,” Zelenskiy said in a Friday night video address.

The war’s brutality was further hammered home just hours before Putin’s speech when missiles struck a convoy of civilian cars preparing to cross the frontline from Ukrainian-held territory in Zaporozhzhia province.

Reuters saw a dozen bodies amid blasted cars in a scene of carnage. Ukraine said 30 people had been killed and almost 100 wounded.

Ukrainian officials called it a deliberate Russian attempt to sever the last links across the front. Moscow blamed the Ukrainians. 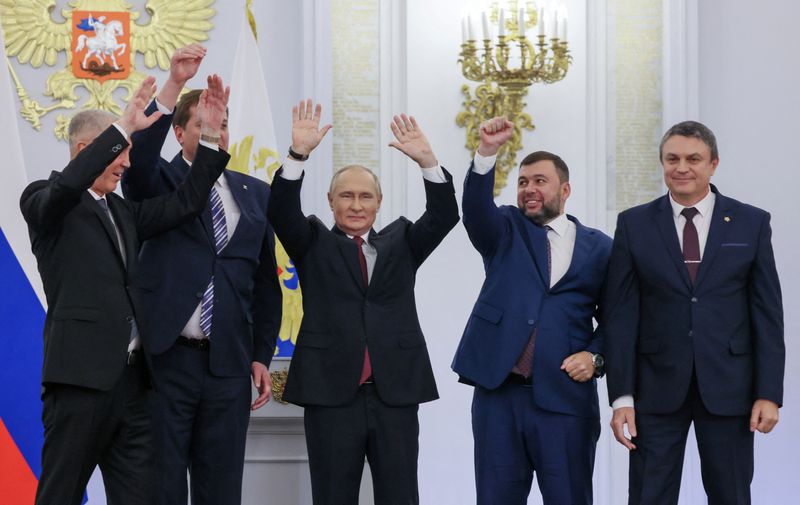 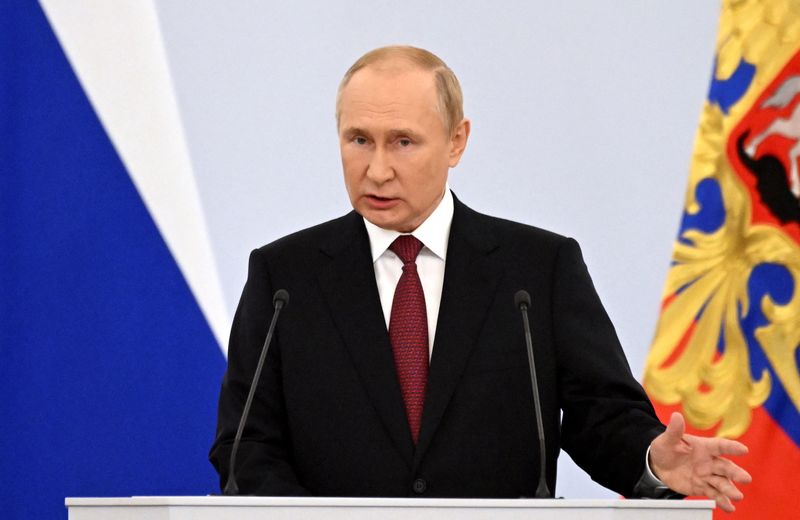 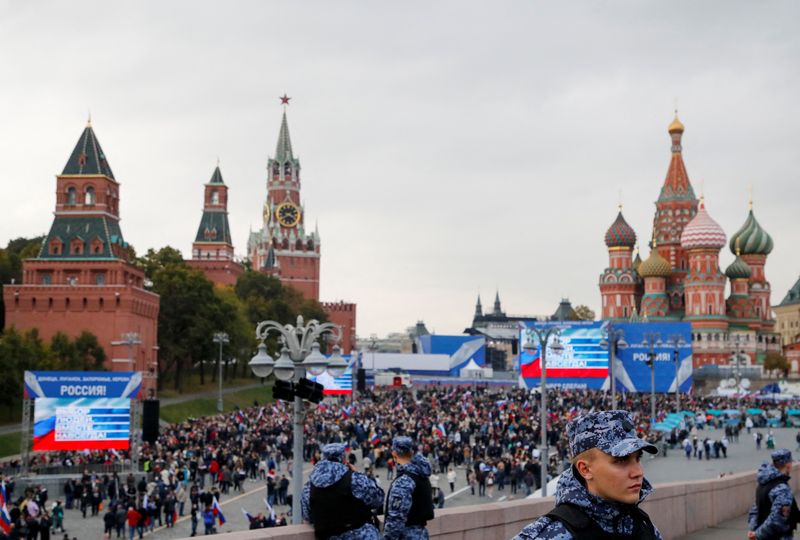 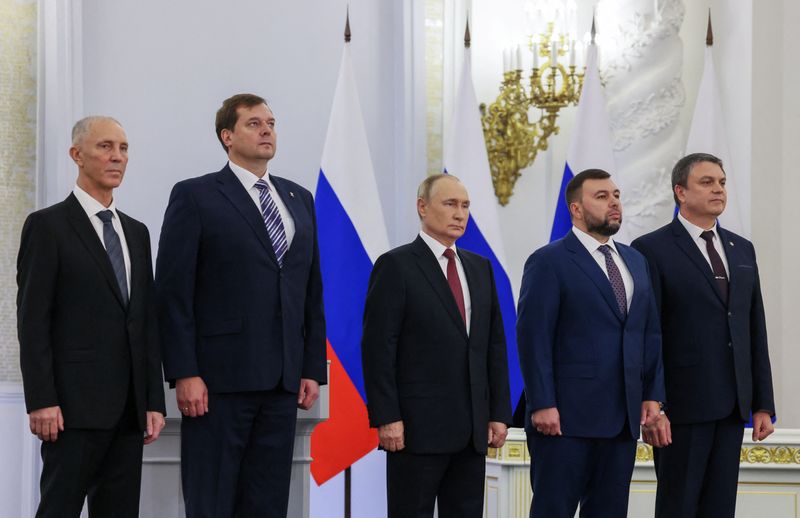 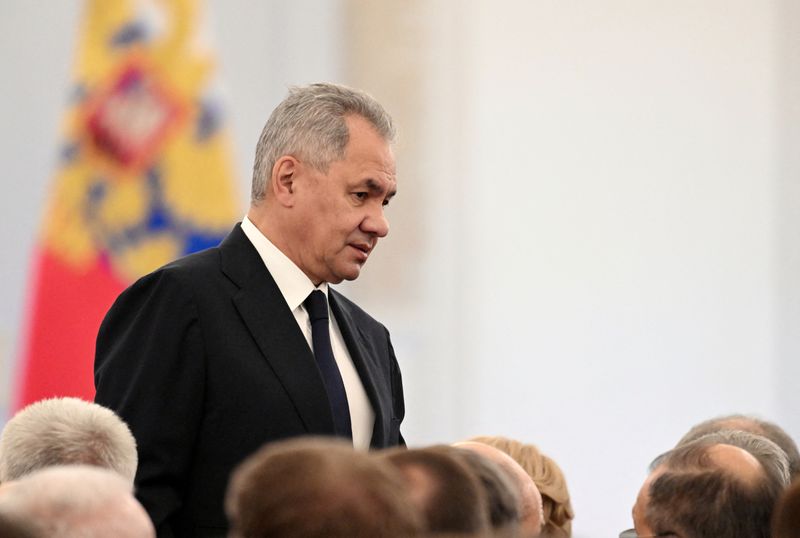 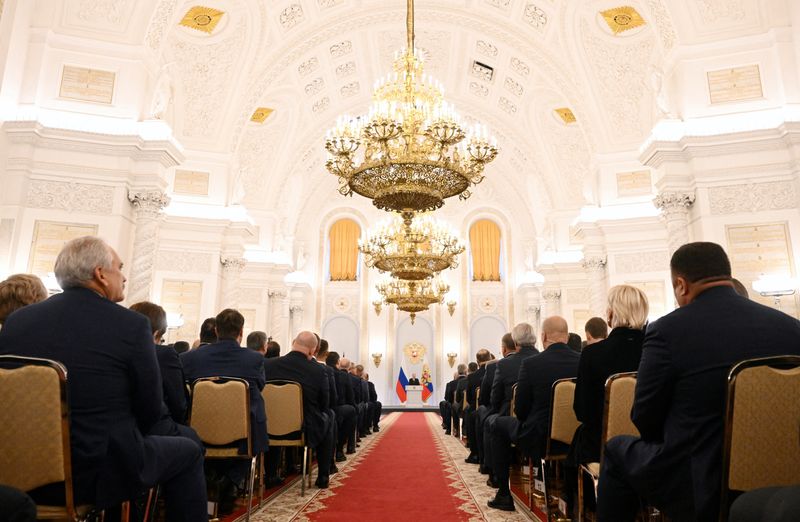