By Federica Mileo and Valentine Baldassari

(Reuters) – DP Eurasia, which runs the Domino’s Pizza brand in Turkey and Russia, said on Friday the group would focus on its Turkish market and growing its coffee business, as Western sanctions and the uncertainty of war overshadow Russian sales.

“The Turkish market has been growing faster than two-to-three years ago and our coffee business is clearly a huge opportunity,” Chief Executive Officer Aslan Saranga told a conference call.

While many Western companies, including McDonald’s and Pizza Hut, withdrew from the Russian market after Moscow’s invasion of Ukraine began on Feb. 24, DP Eurasia said in April it planned to stay, but would limit investment there.

In Russia, the group’s second-biggest market, DP Eurasia had 171 stores as of September compared to 184 at the end of June.

The group on Friday reported total sales jumped 66% in the first six months of the year after it launched cheaper products to cope with inflation.

Before adjustments for hyperinflation in Turkey, sales at the group’s own stores and franchise outlets rose to 1.75 billion Turkish lira ($94.41 million) in January to June, with growth of 58.9% in Turkey and 76.8% in Russia.

In Turkey, DP Eurasia’s largest market, the lira depreciation and economic impact of the war in Ukraine has sent the annual inflation rate to a 24-year high.

The group also reported earnings adjusted for hyperinflation in Turkey for the first time. After this, sales at the group’s own stores and in franchise outlets rose only 11.2%, and fell 3.4% in Turkey.

(Reporting by Federica Mileo and Valentine Baldassari in Gdansk; editing by Barbara Lewis) 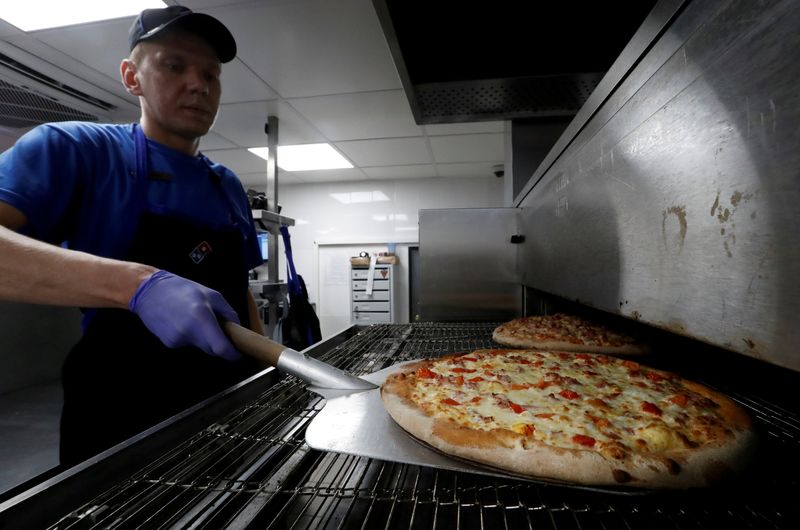