(Corrects typographical error in phrase ‘the threat’ in penultimate paragraph)

SHANGHAI (Reuters) – Chinese authorities have rolled out an array of tried-and-true manoeuvres in recent weeks to slow the yuan’s slide, showing relative success compared with other battered currencies, but analysts say they face long odds against an unstoppable dollar.

The stepped-up efforts, taken as the yuan tumbled about 7% from mid-August to a 14-year-low around 7.25 per dollar on Sept. 28, range from unusually strong signals to the market – last week the central bank told state-owned banks to prepare to sell dollars – to administrative measures that raise the cost of shorting the yuan.

That helped the yuan to regain some traction against the dollar, which also paused for breath against other currencies, but analysts expect the yuan to weaken further in the months ahead with a risk of volatile gyrations along the way.

“Considering the strength of the dollar, we now expect (the dollar/yuan rate) to trade around 7.40 around October and November,” SEB said in a note.

While that was among the more bearish forecasts, ANZ and Goldman Sachs saw a yuan rate of 7.20 per dollar within the next three months or so, with Goldman also noting upside dollar/yuan risks, and Citi said it could push to 7.3 in a strong dollar environment. The yuan late on Friday was trading around 7.12 per dollar.

In a sign that investors do not foresee the new measures tamping down swings in the yuan, expectations of future volatility priced into one-month yuan options have doubled in the past month.

Graphic: Yuan’s rise and fall since 2005

For Chinese authorities, who were particularly keen to stabilise the yuan rate before a week-long national holiday in China this week, the stakes are high.

This is a a politically sensitive time for China’s ruling Communist Party, which is set to open its once-in-five-years congress on Oct. 16. President Xi Jinping is expected to secure a precedent-breaking third term during the gathering.

The yield gap between China’s benchmark 10-year government bonds and the U.S. Treasury for the same tenor is hovering at the widest in 15 years.

NO LINES IN THE SAND

Still, analysts do not expect Beijing to mount a desperate defense of any particular yuan level, in contrast to the last two times the yuan breached the psychologically significant 7 to the dollar level in 2019 and 2020, during the height of China-U.S. trade tensions and the initial outbreak of COVID-19.

“The central bank needs to play a balance between being market-oriented and also ensuring financial stability,” said Ju Wang, head of Greater China FX and rates strategy at BNP Paribas.

“Hence the official line will still be ‘no-lines-in-the-sand-but-two-way-volatility’.”

China’s economy also reaps some benefit from yuan weakness, which bolsters its exports by making them relatively cheaper in dollar terms. The export sector has become a vital pillar for the economy as it struggles with COVID outbreaks and a property crisis.

Further, the yuan has not fallen as sharply against the greenback as have the euro, the yen and other major currencies this year, keeping the yuan comparatively resilient against a basket of currencies of China’s main trading partners, with a fall of only 1.4% year-to-date. Chinese authorities, who have emphasised that they want to make the yuan more international and market-driven, are aiming not to control the long-term value of the yuan, but to prevent a sudden short-term depreciation that would disrupt its economy and capital flows, analysts said.

“As China goes on a week-long holiday, the threat of intervention in the offshore yuan could keep a lid on near-term depreciation,” said Khoon Goh, head of Asia research at ANZ.

Mainland China’s financial markets are closed for the National Day holiday from Oct. 1, during which there will be no onshore trade or daily guidance through midpoint settings. Trading resumes on Oct. 10.

Goh added, however, that how long the threat remains effective will depend on the dollar’s trend.

“While the authorities will want to maintain FX stability into the Party Congress, the widening yield differential between the U.S. and China could still see yuan weakness re-emerge later in the year.”

(Reporting by the Shanghai Newsroom; Editing by Tony Munroe and Edmund Klamann) 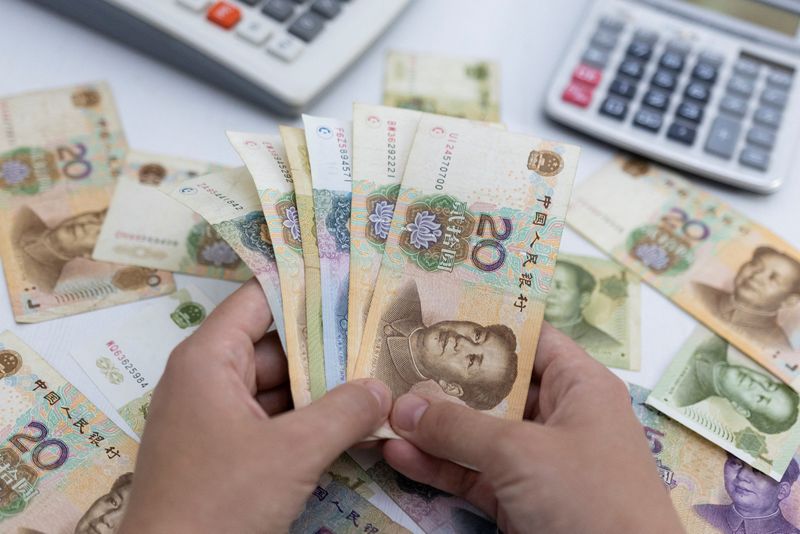