(Reuters) – European shares gained on Monday, in a positive start to the last quarter of this year, as a slew of bleak economic activity data helped ease some jitters around the pace of monetary policy tightening by central banks to stamp out runaway inflation.

The latest Treasury forecasts showed Italy’s economy probably shrank in the third quarter while in the United States, manufacturing activity grew at its slowest pace in nearly 2-1/2 years in September as new orders contracted, likely because of rising interest rates cooling demand for goods.

“The market is coming to realise that a recession is pretty much on its way (in Europe). The manufacturing numbers suggest that that’s true for the U.S. as well and that means at some point the Fed which has been very hawkish might have to hint at a slower pace of tightening going forward,” said Andrea Cicione, head of research at TS Lombard.

The STOXX index has fallen nearly 20% so far this year as the region grapples with an energy crisis exacerbated by the Russia-Ukraine conflict and hawkish signals from the U.S. Federal Reserve and other major central banks dampen risk sentiment.

“The biggest driver of equity performance so far this year has been the tightening of financial conditions. So any indication that the terminal rate doesn’t have to go up more than it already has is good news for the market,” said Cicione.

London’s blue-chip FTSE 100 and mid-caps index also reversed earlier losses to rise 0.2% and 0.7% respectively as the pound edged up following the UK government’s reversal of its controversial tax cut plans that had wrecked havoc on markets last week. {GBP/]

Most of the STOXX 600 sub-sectors were in positive territory, led by energy stocks that were up 3.1%, boosted by a jump in oil prices on risks of OPEC+ supply cuts. [O/R]

Value stocks such as telecom and utilities also gained 2.4% and 2.3% respectively.

Credit Suisse tumbled nearly 1%, reflecting market concern about the Swiss bank as it finalises a restructuring due to be announced on Oct. 27.

(Reporting by Devik Jain and Amruta Khandekar in Bengaluru; Editing by Subhranshu Sahu and Jonathan Oatis) 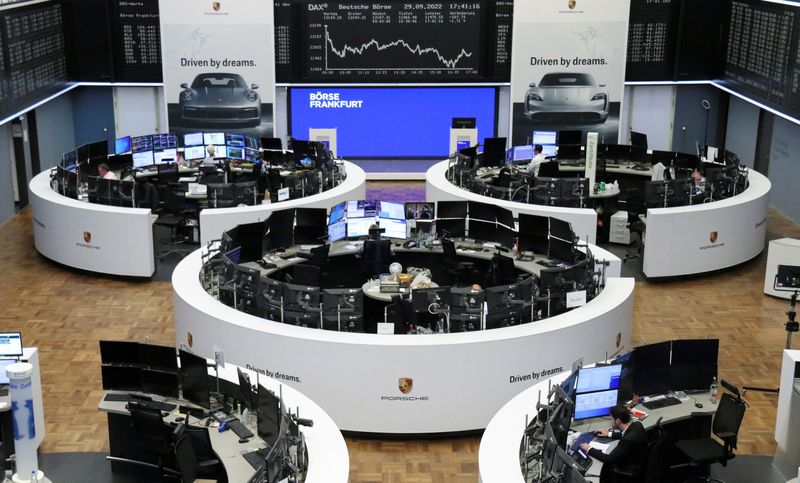