(Reuters) – Five days after Hurricane Ian cut a swath of destruction across Florida and the Carolinas as one of the strongest storms ever to hit the U.S. mainland, officials are still assessing the damage.

Here are some of the early measures of Ian’s catastrophic impact:

As of Monday morning, at least 85 deaths had been attributed to the storm, including 81 in Florida, which took the brunt of Ian’s power when the storm slammed into the state’s Gulf Coast last Wednesday as a Category 4 hurricane with maximum sustained winds of 150 miles per hour (240 km per hour).

More than half of the reported fatalities occurred in coastal Lee County, where officials have defended their decision not to order evacuations sooner.

The death toll is expected to keep rising as search teams reach more areas cut off by floodwaters and debris. Hundreds of people stranded by the storm have been rescued.

“We’ve been to about every address,” he said. “Now we are going back for a second look.”

Insurers are anticipating between $42 billion and $57 billion in losses, risk modeling firm Verisk said on Monday.

That total, which includes damage from wind, storm surge and flooding, excludes losses covered by the U.S. government’s National Flood Insurance Program or costs associated with litigation, among other elements. Those could bring the top end of the estimated range closer to $60 billion, Verisk said. Virtually all of the losses stem from Florida.

CoreLogic, a U.S. property data and analytics company, estimated the insured losses in Florida at between $28 billion and $47 billion on Friday, when Ian was taking aim at South Carolina after marching across Florida.

Around 600,000 homes and businesses remained without power in Florida early on Monday. The storm knocked out power to more than four million customers in Florida.

Ian also left more than 1.1 million homes and businesses in North and South Carolina without power over the weekend, though most of those customers have since had their power restored.

There were more than 140 boil-water advisories in effect across Florida on Monday, including for all of Lee and Charlotte counties, two of the hardest-hit areas. The state dispatched 20 trucks carrying 1.2 million gallons (5.5 million liters) of water to support hospitals in Lee County without potable water, the office of Governor Ron DeSantis said.

More than 7,000 patients have been evacuated from more than 150 healthcare facilities, state officials said on Monday.

Florida’s Gulf Coast sustained the most damage after Ian crashed ashore on the barrier island of Cayo Costa Island.

Other barrier islands such as Sanibel Island and Fort Myers Beach, both popular vacation destinations, saw homes swept away, buildings torn apart and boats washed onto streets. Parts of the causeway connecting Sanibel Island to the mainland collapsed, while the bridge between Pine Island – just north of Sanibel – and the mainland was also damaged, cutting both islands off.

The storm’s heavy rainfall also brought floodwaters inland, including to Orlando and the surrounding communities, and central Florida could see record river flooding this week, according to the National Weather Service. 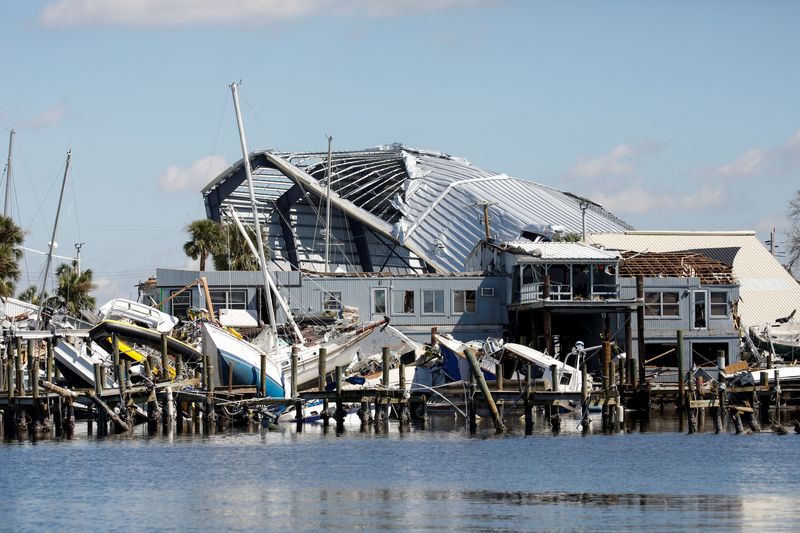