DUBAI (Reuters) -Iranian security forces deployed at universities in several cities on Wednesday, witnesses said, stepping up efforts to quell more than two weeks of protests ignited by the death of 22-year-old Mahsa Amini in the custody of morality police.

The nationwide unrest sparked by her death has spiralled into the biggest challenge to Iran’s clerical leaders in years, with protesters calling for the downfall of the Islamic Republic founded in 1979.

Riot police fanned out in the cities of Urmia, Tabriz, Rasht and the capital Tehran, particularly around universities which have been a focal point of protests in recent days, the witnesses said.

“There are lots of security forces around Tehran University. I am even scared to leave the campus. Lots of police vans are waiting outside to arrest students,” said a student in Tehran.

Rights groups say thousands have been arrested and hundreds injured in the crackdown waged by security forces including the Basij, a volunteer militia affiliated with Iran’s Revolutionary Guards. Rights groups put the death toll at over 150.

Authorities have reported numerous deaths among the security forces, accusing foreign adversaries including the United States of meddling to destabilise Iran.

In a footage said to have been filmed at a school in Shiraz on Tuesday, about 50 female pupils surrounded a member of the Basij who had been invited to give a speech, shouting “Basij get lost” and “death to Khamenei”.

Reuters could not independently verify the videos.

People from different layers of the society across Iran have joined protests since Amini, an Iranian Kurd, died after being detained in Tehran on Sept. 13 for “inappropriate attire”.

The death of a 17-year-old girl since the start of the protests has become another focal point of protester anger, with activists on Twitter saying Nika Shakarami was killed in Tehran while demonstrating over Amini’s death.

State media said on Wednesday a judicial case had been opened into Shakarami’s death, citing officials claiming it had nothing to do with the unrest, and that she had fallen off a roof and her body contained no bullet wounds.

Analysts do not believe the clerical establishment is close to being toppled despite growing frustration over strict social and political limitations imposed over the past four decades since the fall of the U.S.-backed Shah.

The government has ordered an investigation into Amini’s death, which Khamenei has said left him “heart-broken”.

Vahidi, the former commander of the Revolutionary Guards’ Quds Force, defended the dress code law, saying protesters saw “freedom in the nakedness and shamelessness of women”.

Amini’s death and the crackdown have compounded tensions in Iran’s already difficult relations with the West, deepening rifts at a time when negotiations to revive Tehran’s 2015 nuclear deal with world powers have stalled.

Iran has summoned several ambassadors from Western countries it accuses of meddling or playing a part in the unrest.

State media reported that the British ambassador, already summoned once, was summoned again on Tuesday in reaction to “interventionist comments” from the British foreign ministry.

In signs of growing international support this week, leading actresses in France like Juliette Binoche and Isabelle Huppert cut locks of their hair in protest at Amini’s death, and a Swedish member of the European parliament snipped off her ponytail while giving a speech. 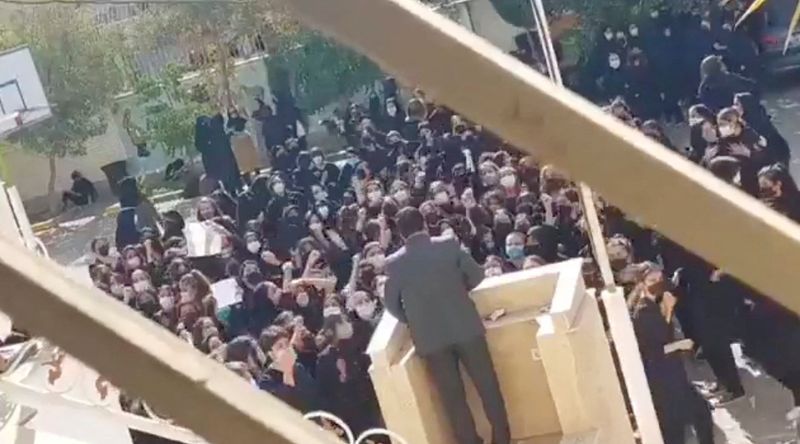