WASHINGTON (Reuters) – U.S. voters prefer Republicans over Democrats for solving immigration and crime problems, suggesting the Republican emphasis on border security and fighting crime could help it in the Nov. 8 midterm elections, a Reuters/Ipsos poll showed.

The poll, conducted Sept. 27-Oct. 3, underscores the advantages Republicans have ahead of the elections when they are favored to win control of the U.S. House of Representatives and could take the Senate as well.

Forty percent of registered voters said Republicans were the party best suited to address immigration, compared to 32% who picked Democrats.

For solving crime, 39% picked Republicans and 30% picked Democrats. The rest said they didn’t know – or picked another party or independents.

While high rates of inflation remain the top concern for U.S. voters, crime and immigration are seen as important themes for motivating core Republican voters to turn out and vote – and for picking up votes from independents and moderate Democrats.

Overall, 30% of registered voters in the poll said their top concern was inflation, with 5% choosing immigration and 4% choosing crime.

A survey of big-city police executives released last month showed the number of murders had fallen in the first half of 2022 compared with 12 months earlier, but that robberies and assaults were on the rise.

The foreign-born share of the U.S. population climbed to 14.3% in 2021, the highest since the early 1900s, while arrests of migrants attempting to cross the U.S.-Mexico border have climbed to record highs since President Joe Biden, a Democrat, took office in 2021.

The Republican edge on crime and immigration is sharpest in some of the party’s core voting groups, such as non-Hispanic whites without a college degree. Among those respondents in the Reuters/Ipsos survey, the share picking Republicans was twice as high as it was for Democrats.

But Republican strength extends far beyond that demographic group.

Among women who said they lived in suburban areas – a group that has played a critical role in recent U.S. elections – Republicans led Democrats by seven percentage points on immigration and by eight points on crime.

People with college degrees – a core voting group for Democrats – picked Democrats more often for immigration issues. But they were almost evenly split between the two parties on crime.

Conant said Democrats remain dogged by some progressive members’ past support for measures to shift spending from police budgets to public services like mental health.

The themes are a regular feature of Republican campaign ads.

Political strategists from both parties say the Republican push to harness anxieties of some voters over crime and immigration is partly about countering Democrats’ strength on abortion, following a June ruling by the conservative-dominated U.S. Supreme Court which overturned the constitutional right to abortion. Six percent of registered voters in the poll cited changing abortion laws as their top concern.

“Abortion is a bigger issue for suburban women who are swing voters,” said Mike Mikus, a Democratic strategist in Pennsylvania. The Reuters/Ipsos poll showed suburban women favored Democrats over Republicans 40% to 24% on the issue of abortion.

An Arizona judge ruled last month that a 1901 ban on nearly all abortions in the state can be enforced after being blocked for about 50 years.

“You have overwhelming numbers of female, suburban voters bailing on Republicans, based upon that issue,” said Coughlin.

The Reuters/Ipsos online poll gathered responses from 4,415 U.S. adults nationwide and had a credibility interval, a measure of precision, of between 2 and 5 percentage points. 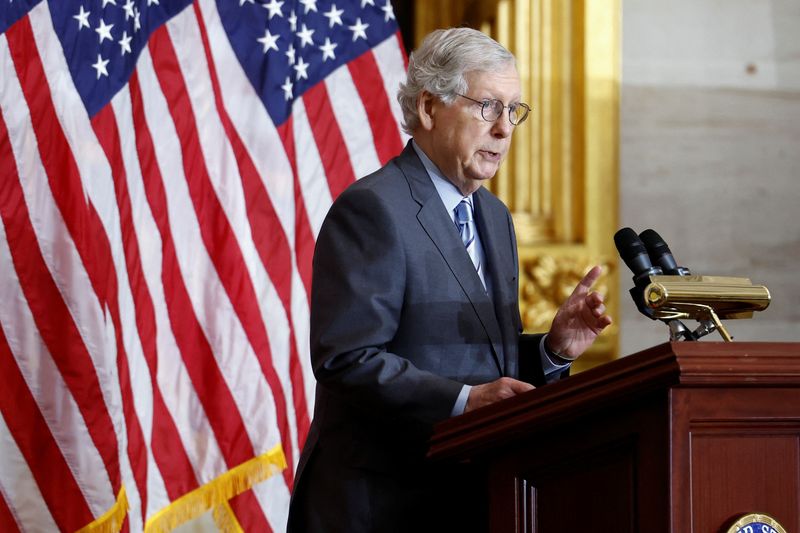