PARIS (Reuters) – A more than doubling in egg prices in France due to soaring feed and energy costs and a lack of supplies after the worst ever bird flu crisis has prompted some food companies to lower output or change recipes, egg producers said on Wednesday.

Both the European Union and the United States have experienced one of their worst bird flu crises ever this year with tens of millions of poultry culled in each region.

In turn world egg production, which hit 1,500 billion in 2021, was expected to fall for the first time in history this year, following a 4.6% drop in the United States, a 3% decline in the EU and an 8% slump in France, the bloc’s largest egg producer, French industry group CNPO said.

“We are in a situation that has never been seen before. In previous crises we used to turn to imports, notably from the United States, but this year the situation is bad everywhere,” CNPO deputy chairman Loic Coulombel said.

“Unable to pass the price rise some companies have already started changing recipes or have halted production lines,” Coulombel said. “You need a lot of eggs to make cakes or egg pasta.”

A change in recipe could be switching types of eggs, reducing the volume used or, more rarely, exchanging them for alternatives such as pea or milk proteins.

Prices of eggs in French supermarkets have risen about 15%-20% since the start of the year, following a law that indexes food prices in supermarkets to producers’ animal feed costs.

But industry egg prices on the French spot market, which are also linked to supply and demand, were trading at 2.2 euros ($2.2) a kilogramme on Wednesday, more than double their price at the start of the year and about 65% above their average price at this time of the year, Coulombel said.

They were likely to surpass a record 2.3 euros/kg before the end of 2022 due to growing demand at year-end but would still remain well below U.S. spot prices for standard eggs, now at 4.24 euros/kg, he said. 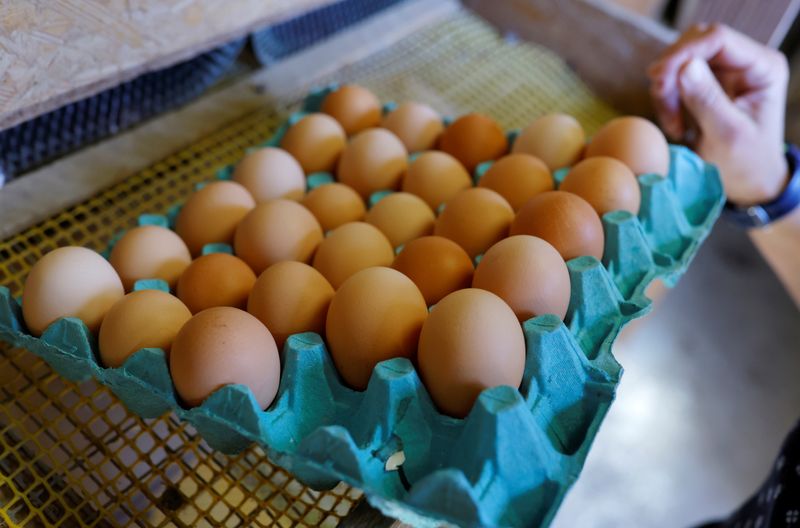