BIRMINGHAM, England (Reuters) -Prime Minister Liz Truss sought on Wednesday to restore her authority following a chaotic first month in power, urging her Conservative Party to trust her to secure economic growth and steer Britain through “stormy days” ahead.

Addressing Conservative lawmakers and members at an annual conference beset by internal bickering and policy confusion, Truss looked to reassure her party, the public and investors that her plan was the right way to transform Britain.

“I am ready to make hard choices. You can trust me to do what it takes. The status quo is not an option,” she said in her speech to the party faithful in the central English city of Birmingham.

“These are stormy days….. I’m determined to get Britain moving, to get us through the tempest and to put us on a stronger footing.”

The conference, once expected to be Truss’s crowning glory after she became prime minister on Sept. 6, had turned into a personal nightmare after the announcement of a new economic plan triggered a crisis of confidence among investors.

Her attempt to cut 45 billion pounds ($51 billion) of taxes and hike government borrowing sent markets into a tailspin and borrowing costs sharply higher.

Forced to reverse the most divisive policy – the scrapping of the top rate of tax – Truss was then openly challenged by lawmakers and ministers over other policy areas, in stark contrast to the sense of discipline on display last week at a conference of the main opposition Labour Party.

The Conservatives now trail Labour by an average of 25 percentage points in opinion polls and Truss herself is already less popular than her scandal-plagued predecessor Boris Johnson ever was, according to a YouGov poll released on Wednesday.

‘WHO VOTED FOR THIS?’

With fears growing among Conservative lawmakers that they could lose their seats at the next election, Truss needed to perform strongly in Birmingham.

Truss received a standing ovation on entering the conference hall but as she started to speak, two climate protesters from Greenpeace held up a sign asking “Who voted for this?”, referring to Truss’s radically different direction to Johnson who won the last election in 2019.

Truss, in contrast, was chosen only by party members.

The protest seemed to fire up the audience and the prime minister, whose criticism of what she called “the anti-growth coalition” received loud cheers and applause.

“Cutting taxes is the right thing to do, morally and economically,” said Truss.

“For too long, the political debate has been dominated by how we distribute a limited economic pie. Instead, we need to grow the pie so that everyone gets a bigger slice.”

“That is why I am determined to take a new approach and break us out of this high-tax, low-growth cycle,” she said.

Truss has previously admitted that she is not the slickest communicator, but many in the audience said they thought she had given a decent performance under intense pressure, including from some within her own party unhappy with her plans.

Khatija Meaby, a 75-year-old grandmother from London, said Truss was “never going to be an electrifying speaker. However, she is right that we have to grow the economy”.

Another conference attendee, Dimabo Wolseley, 51, a lawyer also from the capital, said Truss had appeared “very confident”, despite the “snakes in the party. If they continue to cause trouble they should be kicked out”.

Truss’s early tax U-turn has emboldened sections of her party who are now likely to resist public spending cuts as the government seeks ways to fund the overall fiscal programme.

That risks not only the dilution of her “radical” agenda but also raises the possibility of an early election.

Some lawmakers fear Truss will break a commitment to increase welfare payments in line with inflation, something they argue would be inappropriate at a time when millions of families are struggling with soaring prices.

Ministers say they have yet to take a decision and are obliged to look at economic data later this month.

For now, markets have largely stabilised after the Bank of England stepped in to shore up the bond market.

Sterling weakened against the dollar as Truss spoke, ending a six-day rally but staying well off recent lows. 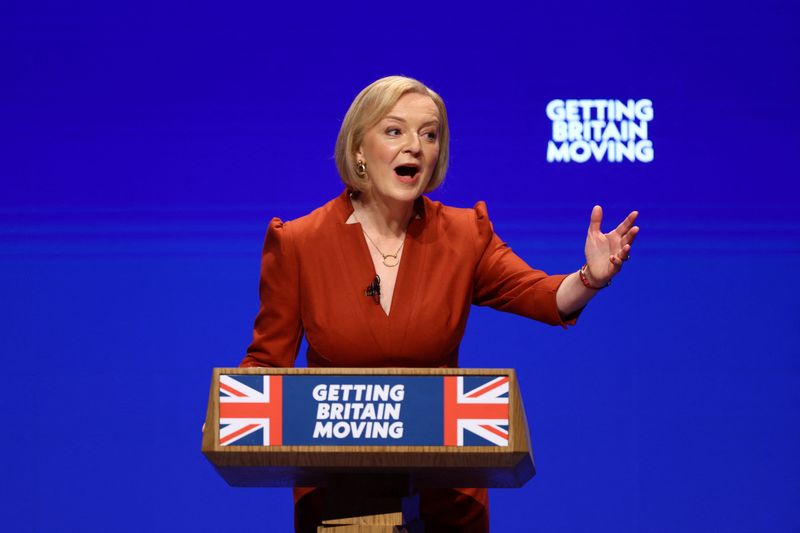