NEW YORK (Reuters) -The family of Daniel Prude, a Black man whose March 2020 death under police restraint sparked protests in upstate New York, has agreed to a $12 million wrongful death settlement with the city of Rochester, Mayor Malik Evans said on Thursday.

The city admitted no wrongdoing as part of the agreement with Prude’s estate, which Evans said would allow Rochester, a city with 200,000 residents, to avoid a costly court battle.

“Given the costs of continued litigation, this settlement was the best decision,” Evans said in a statement. “It would have cost taxpayers even more to litigate, and would have placed a painful toll on our community.”

The agreement is believed to be the largest civil rights settlement in the city’s history, according to Matthew Piers, a lawyer for the family.

“No purely monetary settlement can truly address the fundamental problem of police violence that underlies this tragic case,” he said in a statement. “Policing in this country must be reformed to be more humane.”

In September 2020, Prude’s family had released body-worn camera footage it had obtained showing Prude naked, lying in a dark, snowy street, being restrained by officers. A mesh “spit hood” had been placed over his head after he told officers he was infected with the coronavirus.

After release of the video, the head of Rochester’s police union, Michael Mazzeo, defended the officers, saying that they had followed protocols in using a hood to restrain Prude.

The footage led to a round of protests in Rochester against police violence and racial injustice. It came months after nationwide demonstrations triggered by the police killings of George Floyd in Minneapolis and Breonna Taylor in Louisville, Kentucky.

Last year, the Prude family filed the lawsuit in federal court alleging that the officers caused Prude’s death by restraining him when he was dealing with a mental health crisis.

In the suit, the family said the city was responsible for his death, alleging it had failed to properly train its officers and hold them accountable for wrongdoing.

Seven officers involved were suspended from the force as state Attorney General Letitia James led an investigation into the incident. Rochester Police Chief La’Ron Singletary resigned amid protests days after the video’s release.

In February 2021, a grand jury declined to indict any of the officers. 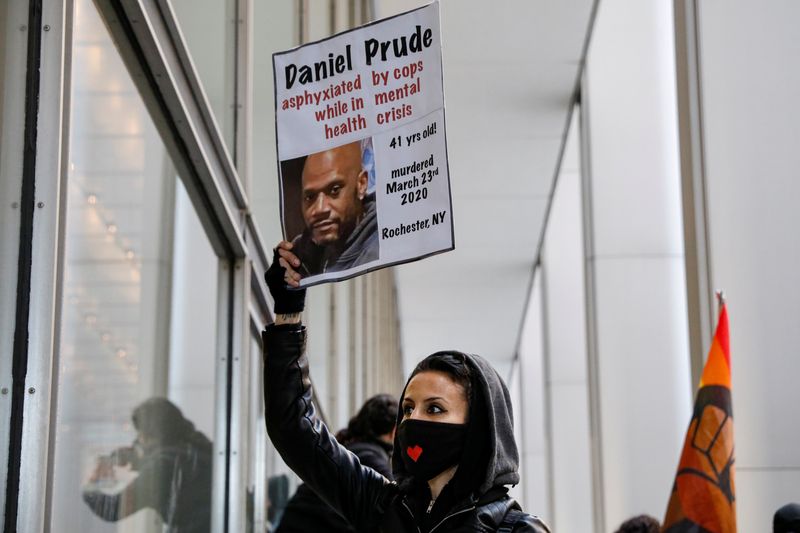