WASHINGTON (Reuters) -Conservative U.S. Supreme Court justices on Tuesday signaled sympathy toward Alabama in the state’s defense of a Republican-drawn electoral map in a case that could further erode a landmark voting rights law, drawing a skeptical response from its newest member, Ketanji Brown Jackson.

The court on the second day of its new nine-month term heard about two hours of arguments in Alabama’s appeal of a ruling by a panel of three federal judges that the map setting the boundaries of the state’s seven U.S. House of Representatives districts unlawfully diluted the clout of Black voters.

The case illustrated the ideological divide on a court with a 6-3 conservative majority.

Jackson, the first Black woman on the court, and the two other liberal justices, Sonia Sotomayor and Elena Kagan, vigorously questioned Alabama Solicitor General Edmund LaCour as he defended the map drawn by his fellow Republicans who control the state legislature. The conservative justices appeared sympathetic to some of LaCour’s arguments.

Black voters challenged the legality of the Republican-drawn map. The lower court found that the map concentrated Black voters into a single House district even though Alabama’s population is 27% Black, while spreading the rest of the Black population in other districts at levels too small to form a majority in violation of a 1965 law called the Voting Rights Act that bars racial discrimination in voting.

LaCour argued that the map was “race neutral,” that using a key Voting Rights Act provision to boost the power of minority voters may violate the guarantee of equal protection under the law enshrined in the U.S. Constitution’s 14th Amendment and that states should ignore the question of race when devising electoral maps.

Conservative Justice Samuel Alito expressed support for raising the burden on plaintiffs to show that an electoral map is unlawfully biased.

In “every place in the South … will not the plaintiffs always run the table?” Alito asked U.S. Solicitor General Elizabeth Prelogar, representing President Joe Biden’s administration in backing the plaintiffs.

The Voting Rights Act was enacted at a time when Southern states including Alabama enforced policies blocking Black people from casting ballots. The case centers on a provision aimed at countering voting laws resulting in racial bias even absent racist intent.

A ruling is due by the end of June. A decision siding with Alabama could make it harder to prove state voting laws harm minorities.

Jackson, a Biden appointee, emphasized the historical intent of the 14th Amendment, ratified in 1868 after the U.S. Civil War to help protect the rights of newly freed Black enslaved people. It was to ensure equality of all citizens and was not a “race-neutral or race-blind idea,” Jackson said on her second day of arguments as a justice.

The Voting Rights Act, Jackson added, “is saying you need to identify people in this community who have less opportunity and less ability to participate and ensure that that’s remedied, right? It’s a race-conscious effort.”

LaCour said drawing Alabama’s map of House districts “in favor of one racial group” would itself be racially discriminatory, violating the 14th Amendment, because it would be “harming some other group on account of race.”

Kagan said endorsing Alabama’s arguments could lead states to draw maps in which minorities “could essentially be foreclosed from electing a candidate of their choice anywhere.” Kagan noted that Supreme Court rulings in 2013 and 2021 already undermined other Voting Rights Act protections.

“It’s one of the great achievements of American democracy to achieve equal political opportunities regardless of race, to ensure that African Americans could have as much political power as white Americans could,” Kagan said of the landmark law.

Sotomayor questioned LaCour about why the Republican-drawn map split up certain Black communities among House districts but not certain white communities.

The lower court ordered Alabama to configure a second House district where Black voters could hold a majority or close to it. But the Supreme Court, in a 5-4 decision in February powered by its conservatives, let Alabama use the map for the Nov. 8 elections in which Republicans are trying to regain control of Congress.

Electoral districts are redrawn each decade to reflect population changes. In most states, such redistricting is done by the party in power, which can lead to map manipulation for partisan gain.

Alito said racially polarized voting patterns in Alabama and some other states “may be due to ideology and not have anything to do with race.”

“It may be that Black voters and white voters prefer different candidates now because they have different ideas about what the government should do,” Alito said.

Other conservative justices seemed skeptical about a second Black-majority district, but signaled there might not be appetite for a sweeping ruling upending the court’s Voting Rights Act precedents.

Conservative Justice Brett Kavanaugh focused on whether the proposed districts complied with traditional redistricting principles including that they are geographically compact. 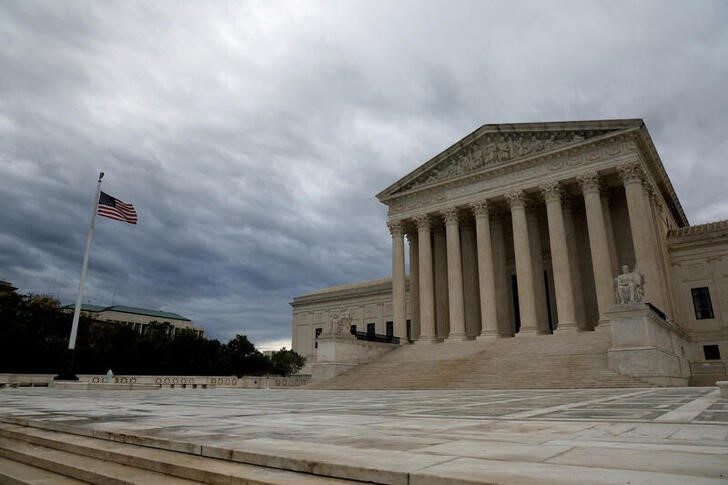